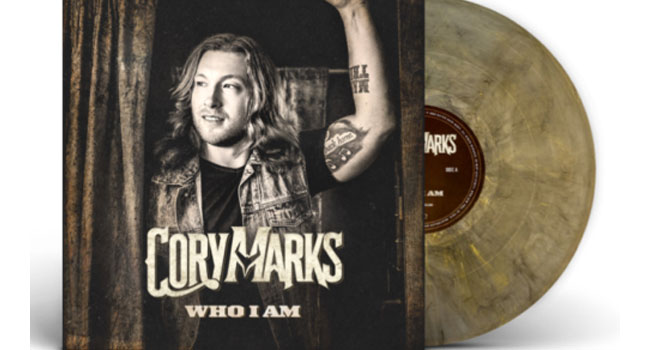 Cory Marks mixes country music with the hard-hitting stomp of rock and roll to create songs with wide appeal to fans of both genres. His album, Who I Am is full of autobiographical storytelling, guitar-driven anthems – fan favorite “Outlaws & Outsiders” (featuring Ivan Moody of Five Finger Death Punch, Travis Tritt and Mick Mars of Mötley Crüe) – and other fan-friendly tracks like “Blame It On The Double,” “Devil’s Grin,” “Better Off ” and the latest single “Drive” – all inspired by childhood favorites ranging from The Rolling Stones to Rush to Waylon Jennings and other outlaws of country music.

The latest track to debut from Who I Am, “Drive,” is now available. The release of “Drive” coincides with the pre-order for the album, which is available August 7th via Better Noise Music. Special “Gold Stone Creamery” color melt vinyl will be available, as pictured above.

Marks says, “’Drive’ is one of those summertime, roll down your window good feeling love songs.” The video is equally summer-ready, with a wide-open landscape and a love story accompanying the road-trip-ready vocals. A video for “Drive” featuring some wide-open country roads and big sky to enhance the message of the track is also available.

Billboard Magazine called “Outlaws & Outsiders” the 2019 Hit That Couldn’t be confined and country and rock fans agree. The track has made the steady climb to the top of the radio charts, since its release in November 2019. Currently a Top 10 hit in the US and Top 15 in Marks’ native Canada at Active Rock Radio, the song has blown past genre-barriers. Trending at No. 8 in the US and No. 30 globally on the Shazam Discovery charts, “Outlaws & Outsiders” ranks among the greatest songs of all genres – Black Eyed Peas, Billy Joe Armstrong & G-Easy – illustrating the appeal of country rock music beyond genre lines. As rock and country audiences continue to fuel the new growth of streaming, Apple and Amazon have led the way with the introduction of popular new Outlaw Country/Country-Rock hybrid playlists. The inclusion of “Outlaws & Outsiders” on these playlists has helped Marks build a large audience.

“Outlaws & Outsiders” can also be heard on the soundtrack to the forthcoming Sno Babies from Better Noise Films – a gripping tale about the grim realities of teenage drug addiction and its effects on a middle-class suburban town. As the film and related projects lend support to those in recovery who are struggling in quarantine, Marks is proud to be a part of the efforts.

Since the start of quarantine, Marks has been attentive to his audience, doing two well-attended live sessions per week – one on his Instagram and one via Facebook. He has also done sessions for U.S Troops via @shopmyexchange and for radio stations and press worldwide.