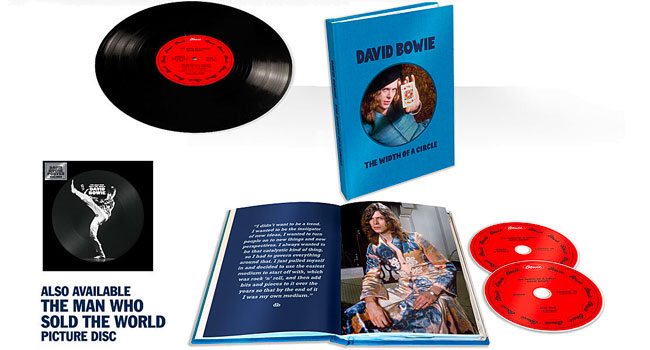 Parlophone Records is releasing a new 2 CD set edition of David Bowie’s The Width of a Circle, the companion album to Metrobolist (The Man Who Sold The World). The set is available May 28th and features a hybrid of studio and live tracks that wrap up Bowie’s 1970 recordings.

The live tracks are performed by Bowie and the Tony Visconti trio known as The Hype and feature previously unreleased rare recordings.

The news comes as the original Metrobolist album celebrates its 50th anniversary last week. The album began the collaboration with guitarist Mick Ronson that would continue with such Bowie classics as Hunky Dory, Ziggy Stardust and Aladdin Sane. The 2020 re-release of The Man Who Sold The World restored the album’s intended title Metrobolist, while featuring a new mix by Visconti. The album and title track were named after a painting by Bowie’s friend George Underwood.

May 28th also sees a picture disc version of The Man Who Sold The World album, featuring the striking black and white imagery of the 1972 reissue. A 10″ LP edition featuring four 2020 remixes will be a David Bowie online store web exclusive, also released the same day.

The Sunday Show Introduced by John Peel (Recorded on February 5, 1970 and broadcast on February 8, 1970 Amsterdam – Performed by David Bowie & The Hype)

The Looking Glass Murders AKA Pierrot in Turquoise