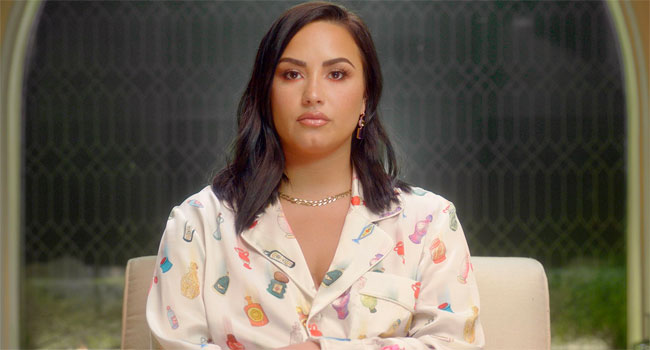 Demi Lovato opens up about her addictions in the new YouTube Originals docu-series, Demi Lovato: Dancing with the Devil. The film made its premiere during the SXSW Online Film Festival on Tuesday (March 16th) evening before debuting in four parts on YouTube starting March 23rd.

The documentary intertwines archival footage and images with newly filmed interviews with members of Lovato’s family, friends, team and others close to her. Celebrity friends also appear in the back half of the film with in-person interviews conducted throughout 2020.

Dancing with the Devil also includes previously unreleased footage from a scrapped 2018 documentary that was halted due to her drug overdose. The former film was set to document her U.S. tour at the time, but featured a “suppressive version” of herself that she believes led to her heroin overdose on July 24, 2018.

“There’s just so much pressure as a female in the industry to look a certain way and feel a certain way,” she says in the 2018 footage. “That shit is triggering.”

Demi Lovato: Dancing with the Devil explores every aspect that led to Lovato’s nearly fatal overdose, and her awakenings in the aftermath. Lovato opens up about her drug addiction, eating disorder, bipolar disorder, and struggles with control. She admits that she mixed meth, molly, cocaine, weed, alcohol and oxycontin that fateful night.

“That alone should’ve killed me,” she claims. “I crossed a line that I never crossed before in the world of addiction.”

Director Michael D. Ratner was granted unprecedented access to the superstar’s personal and musical journey during the most trying time of her life as she unearthed her prior traumas and discovered the importance of her physical, emotional, and mental health. Far deeper than an inside look beyond the celebrity surface, the docu-series is an intimate portrait of addiction, and the process of healing and empowerment.

Dancing with the Devil includes snippets of the actual 911 call made by Lovato’s assistant upon finding her unresponsive following a secretive drug binge with her dealer the night before. A detailed and chilling account of the discovery at her former Hollywood Hills home, as well as Lovato’s recovery, are profiled in the 100 minute documentary.

“I’m really lucky to be alive,” Lovato recounts two years after suffering three strokes, a heart attack, brain damage, multiple organ failure, pneumonia due to asphyxiation, and even declared legally blind from the overdose. Lovato still suffers from blind spots in her vision and can no longer drive.

The film is full of self-discovery and repentance. Lovato confronts her past — and family history — of addiction and abuse in a very moving and informative path to recovery.

“I wanted to show [the fans] the full truth. As painful and as uncomfortable as it was at times, it’s ultimately going to benefit so many people, so that’s why I wanted to share my story,” Lovato says in an after premiere SXSW Q&A session.

Lovato was sober for six years when she overdosed a month after celebrating her sobriety on stage. In between this time, she had written the very personal “Anyone,” which she performed during the 62nd Annual GRAMMY Awards last year in Los Angeles. During the performance, Lovato was struck with so much emotion that she was forced to restart the song seconds into it.

“I feel like with ‘Anyone,’ I knew it was a song I wanted to release coming out of this, because I knew if I ever made it back to the stage, I wanted to sing this song,” she says. “When I listen to the lyrics, I definitely thought it was foreshadowing my overdose. I recorded it days before [the overdose] and the lyrics were everything that I was feeling in the hospital.”

The track is expected to appear on her forthcoming album, Dancing with the Devil… The Art of Starting Over, which is set for release on April 2nd via Island Records. The album’s autobiographical title track is also featured as the theme opening of each part.

Demi Lovato: Dancing with the Devil will take you on an emotional rollercoaster that many can relate to. It’s a must-see film that will make you laugh, cry, but most importantly, shine light on the darkness one must overcome to persevere against their demons.