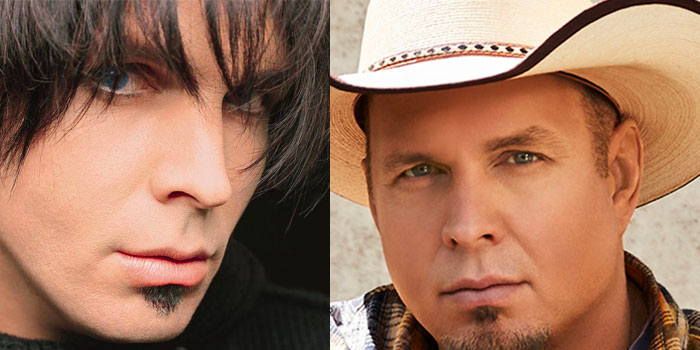 Chris Gaines fans listen up! Garth Brooks is planning to issue more music from his pop star alter ego after more than 20 years. While details are scarce, Brooks shared the exciting news with fans via his weekly Inside Studio G Facebook Live series on Monday (March 15th).

“When it comes to Chris Gaines, I can’t tell you anything except,” Brooks pauses as he looks straight into the camera, “you’re gonna have it in every format you can possibly image, even in vinyl. And, you’re gonna have Chris Gaines stuff nobody’s ever heard before either. It’s all comin’. So the Chris Gaines thing, you just gotta handle it with kid gloves and put it all together, but it’s comin’. I love that project and so I’m excited that there’s — I don’t even know how to say it — I’m excited, we’ll leave it at that. I love the music, it’s really cool.”

In late 2019, Brooks hinted that he may be reliving the project he introduced in 1999 with …In The Life of Chris Gaines, a pre-soundtrack to a film called The Lamb that never made it past the pre-production stages.

The album saw Brooks lose weight, grow his hair and don a body suit as a fictional Australian pop/rock star that had an elaborate backstory so believable a VH1 Behind the Music special was created with interviews by Brooks as Gaines and the real Billy Joel. The project went double platinum and gave Brooks his only pop hit with “Lost In You,” but was a disappointment compared to his previous releases.

During Monday’s 30 minute show, Brooks also shared that he had a writing session with Mitch Rossell — who wrote his latest and 20th No. 1 “Ask Me How I Know” — and Ashley McBryde prior to Facebook livestream.

“We started writing, and we started writing this morning. But it was one of those sessions that you’re writing with two people that love country music. So, before you ever start writing, you’re kind of just knocking songs back from Keith Whitley, all the way over to Tammy Wynette, all the way over to Vern Gosdin, just back and forth, and it was a lot of fun,” Brooks says.

“I gotta tell ya, today was an amazing day. I got to write – she’s going to kill me – I got to write with Ashley McBryde today, which, I’ve never got to. So that was pretty frickin’ cool. And Mitch Rossell. We got a three way write. And the truth is — Mitch will back me up on this — me and Mitch just kind of sat and watched her. She’s an animal, man. She just tore it up!”

“And I can tell you exactly what we wrote! Something country, I’ll tell you that. It’s country. I love writing country music,” he confirms without divulging too many details. “This one is stone country, my favorite kind.”

He also confirms plans to continue his Anthology series later this year by releasing Anthology 2, which covers the back half of his Nineties career.

“I love the Anthologies. We are late, but just found out that Anthology 2, we’re gonna try to get out before the end of the year this year,” Brooks shares.

The set will focus on Sevens, Scarecrow, Double Live and likely the aforementioned Chris Gaines project, although that is speculated at this point. Anthology 1: The First Five Years was released in November 2017 with Anthology 3: Live following in November 2018. Each set contains an exciting, detailed, insider look at a specified period of time during Brooks’ career with first-hand commentary by Brooks and the people involved. Each set also contains CDs with music from that period, including unreleased material and demos. More details as they become available.

Brooks is also teased something with SiriusXM that he plans to discuss on next week’s show. An announcement is expected soon.

The show was his first in a month after he and wife Trisha Yearwood had to quarantine due to someone on their team contracting COVID-19. Two weeks into the isolation, Yearwood was diagnosed, but has recovered. Brooks never contracted the virus.