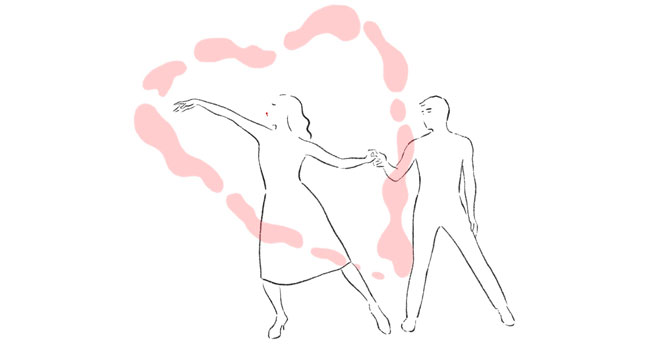 In celebration of the legendary Ella Fitzgerald’s 104th birthday, one of her most enduring and beloved duets with Louis Armstrong, “Cheek To Cheek,” has received a whimsical new animated video. Directed by Brooklyn-based artist Wendy Cong Zhao, the video, inspired by vintage pencil-line drawings, portrays two lovers who meet, separate, and come together again through a series of imaginative, animated dance scenes. “I captured the dancers on video in a traditional studio shoot, then rotoscoped their movements frame by frame to create the animated line art,” said Cong Zhao of her process. “Many drawings were added in that process to complement and transform the dance moves, such as objects and figures freely transitioning and morphing to the flow of the music. The black and white lines, with a few pops of color, reflect a certain sophistication and passion. The music video is a celebration of the romance depicted in this iconic love song.”

Celebrating its 65th anniversary this year, “Cheek To Cheek” was released in 1956 on the pair’s first album together, the aptly titled Ella and Louis on Verve Records. The jazz legends first recorded together in 1946 when Fitzgerald was a 29-year-old rising star of the contemporary jazz scene and Armstrong, at 45, was jazz’s elder statesman. While the two would meet up every few years to cut some tracks, it took a decade for them to do a full album together. A stroke of genius cooked up by Verve impresario Norman Granz, Fitzgerald and Armstrong were not an obvious pairing but somehow, Fitzgerald’s sweet, refined voice and Armstrong’s rough, gravelly growl, just worked so perfectly together. “The old adage that opposites attract couldn’t be more apt in the case of Ella Fitzgerald and Louis Armstrong, whose album collaborations for Verve Records, in the late ‘50s, resulted in some of jazz’s finest and most memorable duets,” said uDiscover, “adding, “the contrast in their vocal timbres resulted in a musical chemistry that made their recordings compelling and unforgettable.”

“Cheek To Cheek” and all of their classic duets are available on the 4 CD and digital set, Cheek To Cheek: The Complete Duet Recordings, which includes remastered versions of Ella and Louis, Ella and Louis Again and Porgy and Bess – along with all of their Decca singles, live recordings from Jazz at the Hollywood Bowl, recorded as a warmup for Ella and Louis, plus several alternates and false starts from the Decca and Verve eras, illuminating their craft and good humor.

Both Ella and Louis and Ella and Louis Again will be reissued later this year as part of Verve/UMe’s acclaimed audiophile-grade all-analog vinyl reissue series Acoustic Sounds. Both albums are considered some of Impulse! Records’ most essential titles, which celebrates its 60th anniversary in 2021.