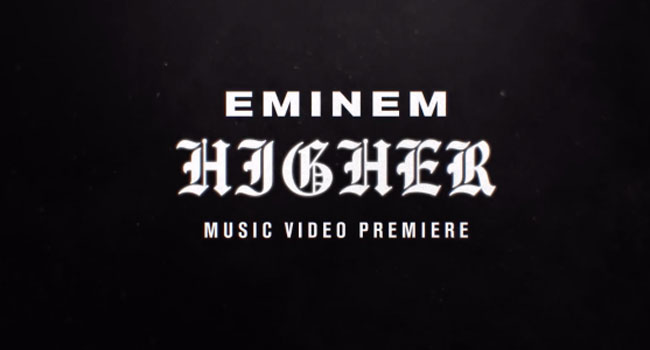 Event will air on ABC

After being featured on ESPN’s UFC 257 creative for the last month, Eminem will debut his new music video for “Higher” during ESPN’s UFC 257 Countdown: Poirier vs. McGregor 2 at 2 pm ET/11 am PT this Saturday, January 23rd on ABC. The video will also re-air on ESPN just prior to Saturday’s main event.

The song comes from the latest Eminem release, Music To Be Murdered By – Side B via Shady Records/Aftermath Entertainment/Interscope Records, which was released on December 18th and is the expanded edition of Music To Be Murdered By, his 11th studio album released January 17, 2020. The music video prominently features footage from ESPN’s UFC coverage and centers around Eminem inhabiting roles as both a musician and a world-class athlete, drawing allusions between the way a musician creates and prepares to perform and how an athlete trains and prepares for competition. The video, featuring cameos from Dana White and ESPN’s Michael Eaves, will revolve around Eminem’s most important battle: the one against his own demons.

“We have always been interested in fostering the synergy between music and sports and along with ESPN we have created many great moments together,” says David Nieman, VP, Sports and Gaming for Interscope Geffen A&M. “Working together to amplify Eminem’s artistic vision in such a unique way for this highly anticipated UFC event is absolutely a high point.”

“It’s always been amazing to be able to work with Eminem for promotional and programming content on various ESPN properties over the years,” states Kevin Wilson, ESPN music director. “To be able to work on this video together with his team – not only featuring our team’s great UFC coverage but also debuting it exclusively on ABC, is just invaluable.”

Eminem has been featured in a number of promotional and programming content for ESPN recently, including UFC 248, UFC 246, a spot with a custom remix and the tease for this year’s College Football Playoff National Championship, featuring him narrating the introduction and more.