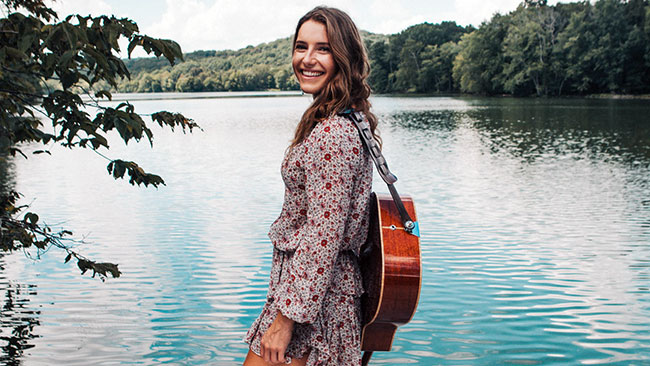 Caroline Jones is an independent country singer/songwriter, multi-instrumentalist (she plays guitar, banjo, harmonica, keyboards and lap steel), and SiriusXM host who just released her brand new EP Bare Feet digitally today (Aug 25th). She not only co-produced the project with Grammy and Academy Award-winning producer Ric Wake (Mariah Carey, Celine Dion, Whitney Houston, Trisha Yearwood), but she also wrote all the songs by herself and played all the instruments except for bass and drums. Her debut single “Tough Guys” spent five weeks at No. 1 on CMT.com‘s 12 Pack Countdown, and “Brown Eyed Girl” is on rotation on SiriusXM’s Coffee House channel.

The singer has also been on tour with the Zac Brown Band throughout the summer on their Welcome Home 2017 Tour. She resumes dates with them tonight in Indianapolis, IN where she says she will perform all six songs from Bare Feet and maybe even some cover songs. Jones spoke with me via phone after a rehearsal and shares her excitement for the EP, the tour and for inspiring more than 150,000 students (so far) with her performances and workshops.

You can read some of the interview’s transcript below and listen to the entire audio interview at the end of this writing. Caroline’s a modern Shania Twain mixing pop, country and dance elements which are sure to please both new and traditional country fans. Fans can learn more, follow Caroline on social media and buy the EP at carolinejones.com.

The Bare Feet EP was released today, and features six songs, including your first single “Tough Guys.” Tell us how exciting this project is to you.

I’m very excited for the Bare Feet EP to be out. I co-produced it, I wrote every single song by myself, and I played all of the instruments except bass and drums. So needless to say, it is my baby, it is my heart and soul put into songs. And, I’m really proud and I’m so excited to share the record with the world because I’ve been performing these songs for some time now on the Zac Brown tour, but to have the record out and the production out — which obviously I had just mentioned I had a big hand in — is super exciting.

You actually co-produced it with Grammy and Academy Award-winning producer Ric Wake which many pop fans would be familiar with through Mariah Carey, Celine Dion, Whitney Houston and even Trisha Yearwood. Tell us how that partnership came about.

Yes, and he is such a joy to work with. Rick has a perspective — a big picture perspective on how to build production from the ground up that is really valuable. I learned so much as well as working with [Grammy Award winning] engineer and mix engineer Gustavo Celis on the record, and we really built the songs from square one — all the guitars, dobro, piano, synths, banjos, everything. We also had a great bass player and legendary drummer on the record Nir Z and [bassist] Glenn Worf. So, working with these veterans and these legends was just so valuable to me and I really grew as a producer, songwriter, musician and singer.

How important is it for an you, as an independent artist, to tour with an artist as big as the Zac Brown Band?

It has been one of the most fulfilling and valuable experiences of my life. Watching the integrity, the excellence and the kindness of every person in their operation from crew to fans to band has been really inspiring, and we’re getting great reception and building lots of new fans from our shows. So, it’s been a wonderful time thus far.