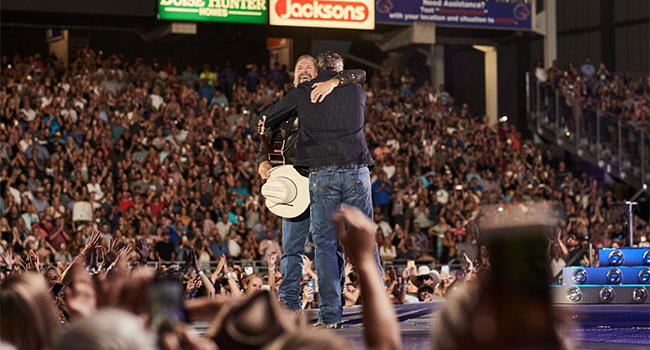 Idaho Statesman praised that the special evenings “evolved into something greater than a meticulously rehearsed stadium show…Singing with a voice that’s still rich and spot-on, Brooks uncorked hit after hit.” The shows also marked the first-ever concerts at Albertsons Stadium and the largest entertainment event in Idaho history.

Since the tour launch, Brooks has broken stadium attendance records in St. Louis, MO at The Dome at America’s Center, Glendale, AZ at State Farm Stadium, Gainesville, FL at Ben Hill Griffin Stadium, two sold out nights at Minneapolis, MN’s U.S. Bank Stadium, Denver, CO at Mile High Stadium, Eugene, OR at Autzen Stadium and two sold out nights at Boise, ID’s Albertsons Stadium shows, both of which sold out in under an hour. The next stop will be Regina, SK’s Mosaic Stadium show on August 10th that also sold out in under a hour, averaging just over 75,000 tickets in each city. Brooks recently added a second date in Regina, SK on August 9th due to demand.

Last week, Brooks kicked off his small Dive Bar Tour at Joe’s on Weed Street in Chicago. This was the first of seven concerts in support of his new single “Dive Bar” with Blake Shelton. The remaining six shows have yet to be announced, although are expected via his Facebook Live series, Inside Studio G, which celebrated its third year during the Monday, July 22nd episode.