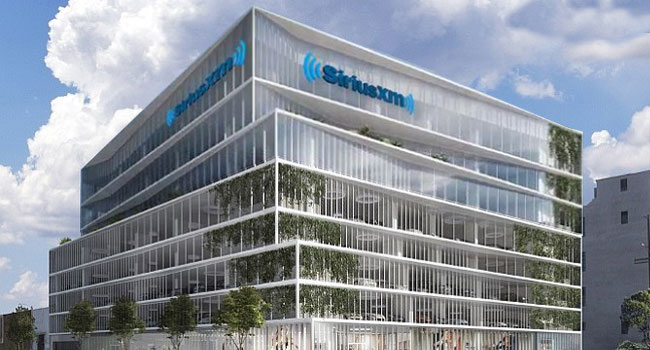 Howard Stern has never been bigger. Now in his 14th year on SiriusXM, he has a new No. 1 best-selling book of his radio interviews, Howard Stern Comes Again, and is regularly complimented as the best interviewer in the business. His edgy, comedic morning radio show and two channels of new and classic Stern now feature Howard Stern Video on the SiriusXM app. Stern, who legendarily loathes travel, broadcasts from outside New York City almost never. His launch of the new SiriusXM Hollywood complex will be his first radio broadcast from outside New York in 15 years, and his first from Los Angeles in almost 20 years.

Located in the heart of the burgeoning Hollywood Media District at 953 N. Sycamore Ave., SiriusXM/Pandora Hollywood has been built from the ground up to reflect the company’s commitment to the West Coast artist community and audience, and to be the base for originating great talk, compelling entertainment, world class music, and exclusive performances for the more than 100 million listeners of the United States’ leading audio entertainment company.

SiriusXM Hollywood’s official October 7th launch with Howard Stern will be preceded by four weeks of special broadcasts and performances across many SiriusXM channels from the new Hollywood studio complex and from legendary venues around Los Angeles.

Los Angeles native and emerging record-setting artist Billie Eilish will perform an exclusive concert for SiriusXM and Pandora listeners at the legendary Troubadour on September 18th.

“The launch of our new SiriusXM/Pandora Hollywood complex is a major step forward in creating the best coast to coast content for our listeners,” states Scott Greenstein, President and Chief Content Officer, SiriusXM. “This world class studio and performance space in the heart of the entertainment capital of the world was a priority for us. As the slate of programming we are delivering over the next month demonstrates, this space will be a must destination for talent and we can’t wait to bring this great content to our listeners nationwide.”

Carrie Underwood will sit down in front of a studio audience to discuss The Cry Pretty Tour 360 and more with host Jenny McCarthy. Carrie Underwood will be joined by tour mates Maddie & Tae and Runaway June. SiriusXM Town Hall to air live on SiriusXM’s The Highway (ch. 56) on Wednesday, September 11th at 1 pm PT and will rebroadcast on SiriusXM Stars (ch. 109) on Saturday, September 14th at 11 am PT.

The Jess Cagle Show, hosted by award-winning entertainment journalist and former editor of People and Entertainment Weekly Jess Cagle, and co-hosted by SiriusXM’s Julia Cunningham, is a daily take on Hollywood, pop culture news, celebrity interviews and more. Jess Cagle is scheduled to be joined by Julia Roberts as his first guest. Additional anticipated appearances during the first week of The Jess Cagle Show include Chelsea Handler, Neil Patrick Harris, John Leguizamo and more. The Jess Cagle Show to air daily from 3 pm PT on SiriusXM Stars (ch. 109).

Billie Eilish will perform an exclusive and intimate concert at The Troubadour. The special performance will feature Eilish performing music from her critically-acclaimed, record-breaking, No. 1 debut album, When We All Fall Asleep, Where Do We Go?, including her first No.1 on Billboard’s Hot 100, “Bad Guy,” as well as other fan-favorites. Billie Eilish concert to air live on SiriusXM’s Alt Nation (ch. 36) at 8:00 pm PT.

Hosted by SiriusXM’s Jess Cagle, Renée Zellweger will sit down for a Town Hall to discuss her new movie Judy, where she portrays beloved actress and singer Judy Garland, from Lionsgate’s screening room in Santa Monica. The Town Hall will also feature a Q&A portion from SiriusXM subscribers in the audience. SiriusXM Town Hall airing during The Jess Cagle Show at 4 pm PT on SiriusXM Stars (ch. 109).

SiriusXM subscribers are able to listen on SiriusXM radios, and those with streaming access can listen online, on-the-go with the SiriusXM mobile app and at home on a wide variety of connected devices, including smart TVs, Amazon Alexa devices, Apple TV, PlayStation, Roku, Sonos speakers and more.