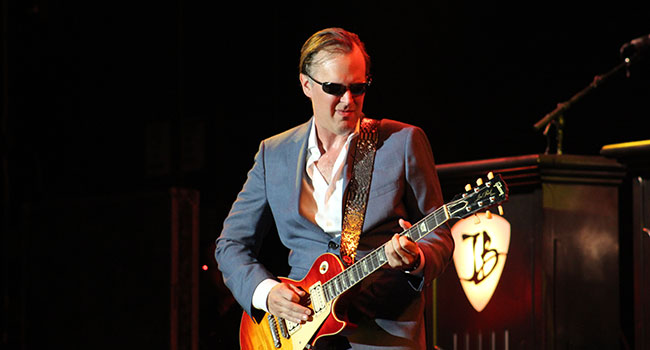 Bonamassa performed at the Fox Theater in Downtown Bakersfield

Guitar virtuoso Joe Bonamassa is proving blues is alive and well with a performance at Bakersfield’s Fox Theater. The two hour show featured fourteen hits full of passion, excitement and jamming done only the way Bonamassa can… with style and substance.

From the opening “Tiger In Your Tank” to the closing ballad “Mountain Time,” Bonamassa and his seven piece band rocked the stage all night long with their massive jams that often stretched double digits. Bonamassa, who has single-handedly brought blues rock back to mainstream, proves computer programming, backing tracks and giant productions aren’t necessary to entertain a crowd. Music is Bonamassa’s focus and it shows as he and his band fed off of each other’s energy while on stage.

The guitar legend has scored 21 No. 1 Billboard Blues Albums, more than other artist in history. The fans showed up ready to party and cheered after nearly each solo. Bonamassa brought history to the stage from the guitars he played to the musicians. Rock & Roll Hall of Famer and member of Stevie Ray Vaughan and Double Trouble, Reese Wynans, rocked the piano and organ and got the largest cheers (besides Bonamassa) when introduced. Full time drummer Anton Fig and bassist Michael Rhodes were unable to attend due to other commitments. Bonamassa mentioned that it was the first time ever he had double subs in a single show, but no one could tell. The band was super tight and full of professionalism. Bonamassa also had two soulful background singers from Australia and a fantastic horns section led by Paulie Cerr who’s performed with some top blues and R&B acts.

It was about an hour into the show before Bonamassa addressed the crowd and introduced the band. “Bakersfield, how are we doing this fine Tuesday evening?” he asks to loud applause. “Last time I was in this building was ten years ago, and I always love this building. I was here twenty years ago with George Thorogood. I have great memories of Bakersfield.”

He briefly mentioned the wildfires that had threatened his Los Angeles home and assured the crowd that his large guitar collection is safe. “People always ask me if the guitars are okay,” he shares. “What about the fucking people inside?”

If blues rock is your thing, you must see Bonamassa live! He turned a fourteen song set list into a two hour show that never got dull or stale. It was full of energy and kept the crowd rowdy all night. His band was featured throughout the performance with fill in bassist Alison Prestwood being a crowd favorite.

Those who attend a Bonamassa show will leave with a breathtaking experience and will have a new appreciation for blues rock. I know I did and I’ve long been a fan of the genre.