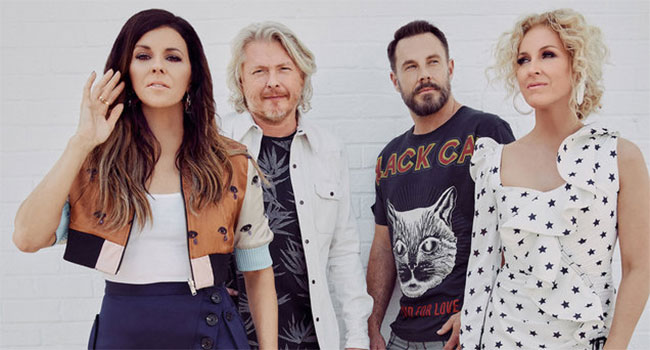 Used to playing arenas and large theaters, Little Big Town traded size for gravitas this weekend, with two shows at the historic Apollo theater, which seats just 1,506 people. The concerts were a part of their launch weekend for the just-released album, Nightfall, which also saw the group perform at Carnegie Hall.

At their final Apollo performance, Little Big Town (Karen Fairchild, Jimi Westbrook, Phillip Sweet, and Kimberly Schlapman) opened behind a shimmering sheer curtain, moon projected above them. At the climax of “Next to You”, the curtain finally fell, revealing
the band front lit for the first time. They continued with the album title track, “Nightfall” before reaching back to 2013’s single, “Sober.”

Stopping for a moment to recognize the audience, the band noted that not only was this an album release party, but it was also a celebration of their career up to that point. Their original fan club president–who drove them around when they opened for Keith Urban–was in attendance. As was Kimberly and Karen’s friend who used to sing with the ladies in college. All were in attendance at the intimate venue to celebrate Little Big Town’s latest achievement.

The band made use of the small stage by placing a circular raised platform in the center. Backgrounds were projected in relatively old-school style: a plain, white backdrop with a hole cut out the center, and another white backdrop recessed behind it. The perfect blank dimensional blank canvas. However, they did not use the circle/square design as creatively as possible. Perhaps they’ll come up with more projections as the gets underway.

Except for a few rockers, (“Rollin’,” “Wine, Beer, Whiskey,” “Stay All Night”) and a few of Little Big Town’s signature tongue-in-cheek numbers, (“Day Drinking,” “Pontoon,” “Tornado,”) the night was mostly a subdued one. Focusing more on the band’s powerful lyrics
and harmony, than trying to party, was an interesting risk. It paid off. Little Big Town continues to prove there is power in stillness.

Perhaps that is also the mission statement of their latest record–that country music doesn’t need to party with the solo cups all the time. If you can sit still and appreciate a good lyric under a glistening melody caught somewhere between country music, pop, and
soul, you’ll love this album.

And it is that last word–soul–that proves why the Apollo was such a great home for Nightfall Launch weekend. With Phillip Sweet’s bitingly longful voice soaring over his piano on “Forever and a Night,” or Kimberly Schlapman’s soulful twang on “Throw your Love
Away,” maybe without meaning to, this pasty-white band has drawn a line from country music all the way back to its African American roots.

Sometimes, the fun of the Little Big Town concert was just to sit and listen to how skillfully the four–who have been together a staggering 33 years–can turn a phrase. One of the greatest assets the band has is their ability to think about and contextualize a song lyric in a way nobody else can.

Nowhere is this trait more prevalent on the new record than “Trouble with Forever.” A glance at the title will make you think “Sugar Coat” is a fun, bubbly romp. It’s the exact opposite.

“The Daughters” is yet another track in the pantheon of “Girl Crush,” though the band embraces the social message a little more here. It will make fans go “Whoa, they did it again,” while making country traditionalists scream “Blasphemy.” Go, Little Big Town.

Little Big Town found their voice with the Pain Killer record, and broke through to those arenas and larger theaters. With follow ups The
Breaker and now Nightfall, the band has cemented their place in a stoic, ethereal realm of country music where lyrics and storytelling are king, soulfulness is queen, and it’s often alright to have a court jester.

Here’s hoping Nightfall, and the ensuing tour, shoots Little Big Town to the moon, the stars, and beyond.