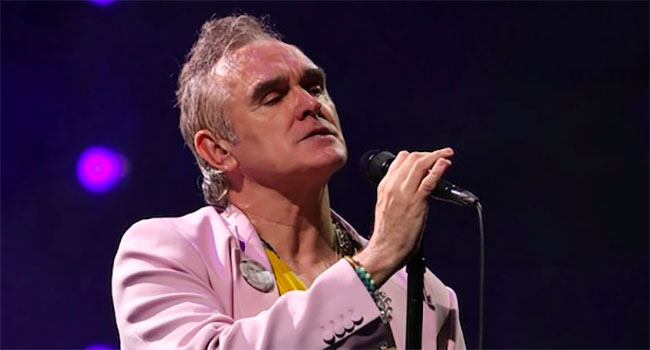 Morrissey has announced his most unlikely run of dates ever, a not-to-be-missed, sure-to-be-life-changing residency “Morrissey: Viva Moz Vegas” at The Colosseum at Caesars Palace on the Las Vegas Strip this summer. Morrissey will play five nights, June 26 – 27, July 1, July 3 – 4. Tickets go on sale to the general public beginning Friday, February 28th at 10 am PT.

Morrissey, once voted the second-greatest living British cultural icon (behind David Attenborough and before Paul McCartney), takes on this residency as his second theatrical outing of its kind following a hallmark sold-out Broadway residency at the Lunt-Fontanne Theater in New York City, which earned unanimous praise from press. The Vegas residency, his latest stateside shows after a string of acclaimed tour dates with alt-rock icons Interpol last fall, comes on the heels of the announcement of Morrissey’s 13th solo album and third studio album for BMG, defiantly titled I Am Not A Dog on a Chain, set to be released on March 20th. The Vegas residency will serve as an intimate, invigorating dive into Morrissey’s expansive career from his early days to the new album. As an artist who is always trying new things, and never wanting to repeat himself, this could be fans’ only chance to experience the provocative combination of Morrissey in Las Vegas. These shows are not to be missed.

General ticket prices beginning at $59, plus applicable tax and fees, go on sale to the general public starting Friday, February 28th at 10 am PT at ticketmaster.com/morrisseyvegas or in-person at The Colosseum at Caesars Palace box office.

Citi is the official presale credit card of Morrissey at The Colosseum at Caesars Palace. As such, Citi cardmembers will have access to purchase presale tickets beginning Tuesday, February 25th at 10 am PT through Citi Entertainment.

I Am Not A Dog on a Chain was produced by GRAMMY-winning producer Joe Chiccarelli (Beck, Tori Amos, The Strokes, The Killers, The White Stripes, The Raconteurs and more), and recorded at Studio La Fabrique in Saint-Rémy de Provence, France, and Sunset Sound in Hollywood, California. Lead single “Bobby, Don’t You Think They Know?,” featuring backing vocals by legendary R&B icon Thelma Houston, was released to great critical and fan response, while his most recent release “Love Is On Its Way Out” was praised by Rolling Stone who said it “boasts cavernous drums and a prickly synth arpeggio that periodically veers into atmospheric spaces while still steadily building to a climactic peak…Morrissey’s vocals carry their characteristic heft.”

Of the epic duet, the GRAMMY-winning Houston said “one of the biggest joys for me in this business is getting the opportunity to collaborate with other top artists. I love the challenge to see if what I do can work with what they’re doing. Sometimes it works, and sometimes it doesn’t. I think the blend of what Morrissey is singing and what I’m singing really works on ‘Bobby.'” Chiccarelli teased that the upcoming album is Moz’s “boldest and most adventurous yet…he has pushed the boundaries yet again, both musically and lyrically. He is in his own category. No one can be Morrissey but … Morrissey!” According to the man himself, I Am Not a Dog on a Chain will be a return to form for the alt-pop pioneer who calls the album “the very best of me … too good to be true … too true to be considered good.”