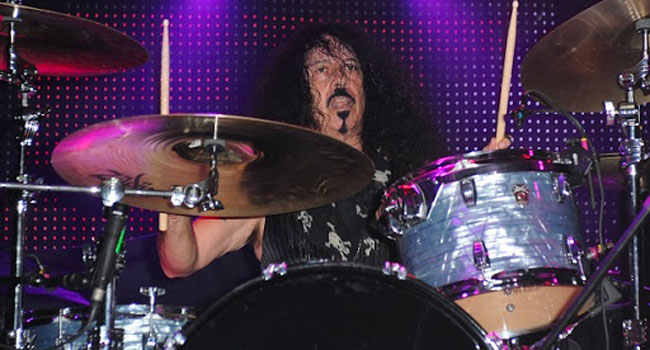 Quiet Riot drummer Frankie Banali has lost his battle with pancreatic cancer at the age of 68. Banali passed away Thursday night (Aug 20th) in Los Angeles after being diagnosed with stage IV in April 2019. He was given only six months to live at the time, but put up a courageous 16 month battle.

Banali went public with his diagnosis last October on social media. He wrote that the cancer treatment caused him to miss several live shows with the band. In early June, Banali spoke with SirisXM’s Eddie Trunk about his battle.

“I’m still fighting the good fight. I’m still doing the chemotherapy. I switched to a different chemotherapy a few months ago. And the side effects on this one are pretty brutal, and they pretty much last into the next round of chemo. So you kind of don’t get a break for about three weeks, and then you get about maybe ten days off, and then the cycle starts again. But it’s part of what I’m doing,” he shared.

Trunk dedicated his Friday episode of Trunk Nation on SiriusXM to Banali where he and artists and fans shared stories about the drummer.

Funeral plans will be announced at a later date.

Per usual, the rock and drumming world took to social media to express their thoughts on Banali’s passing.

Wow. What a day. So sad to hear about the loss of @FrankieBanali. He fought hard until the end. His playing and rock 'n' roll spirit will live forever. A fellow New Yorker, Frankie was the real deal. RIP my friend.
"Take me away from all this death."

It’s w/great sadness that I announce the passing of @FrankieBanali @QUIETRIOT .As many know Frankie had been battling cancer & passed away last night. He was a great person, friend & musician. Join me now on #TrunkNation @siriusxmvolume 106 as we remember him pic.twitter.com/cqqSQS80vd

My hero, mentor, @QUIETRIOT brother @FrankieBanali is now resting in peace and pain free. I will post a follow up in days to come as try to process this unmeasurable loss. https://t.co/E1dqzJH5ln

Frankie Banali The heavy hitter that brought the heartbeat and the beginning of heavy metal in popular music has passed.
You will be missed my friend….
Fly high 🙏
Photo by Wayne Perez pic.twitter.com/cH3Uzt1qcg

So saddened to hear of the passing of my drumming brother @FrankieBanali. He fought an incredibly brave battle against Cancer and his strength and dignity was truly inspiring…Rest In Peace my friend 😢 #RIPFrankieBanali pic.twitter.com/pTXPuqgScG

Saddened to hear that @FrankieBanali has passed away. Not only was he a talented drummer/musician but also a great human being. He will be missed. Condolences, love & prayers to his family and friends.#RIPFrankieBanali pic.twitter.com/V94mjgVkNI

My deepest condolences to the family & friends on the loss of @FrankieBanali.