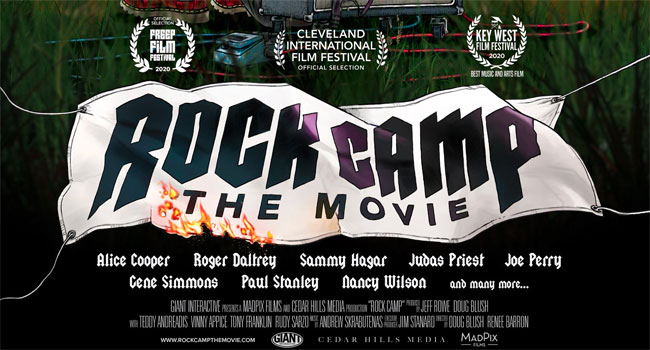 Over the past 25 years, Rock N Roll Fantasy Camp has become a cultural icon where dreamers get to be rock stars for a weekend. A new film called, Rock Camp, The Movie, takes viewers inside the making of these all-star getaways that give everyday people a chance to hang with and learn from their musical heroes.

The nearly 90 minute film follows a few select campers who ascend on Las Vegas where they’re paired with other campers and the rock star “counselors” who teach, inspire, and jam. The camp brings together musicians from all walks of life for an unforgettable experience with legendary rock stars, concluding with a live performance at a famed venue.

Tammy Fischer and Scott “Pistol” Crockett are among the campers profiled in the film. Fischer is a massive KISS fan, drummer and singer, but returns to camp for a second time as a vocalist. Pistol is also a drummer who explains a lost opportunity with a huge star, but continues to forge ahead as he receives a big compliment from Paul Stanley while at camp. The campers featured may have day jobs, but they play regularly and get to improve their talents at each camp they attend.

The film has a lot of heart and soul and captures the dreams of aspiring musicians coming true. Albeit a weekend or two a year, they get to experience the life of a true rock star.