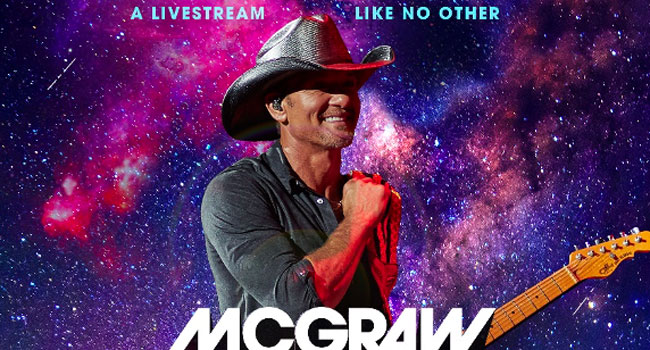 Here on Earth is available now

Tim McGraw celebrated the release of his 16th studio album Here On Earth with a 90 minute out-of-this-world Here On Earth Experience. The show featured McGraw and his band in a stripped down setting on Nashville soundstage that was delayed a half hour due to a lightning storm that caused broadcasting issues. His Here On Earth Tour partners, Ingrid Andress and Midland, were featured in an exclusive pre-recorded pre-show.

McGraw and his band performed on a set that resembled an outdoor patio at night. Multiple LED screens were positioned behind them that featured a starry sky and patio lights. The LEDs were interchanged with videos to correlate with some of the tracks performed. Fans watching the livestream were even shown on the LEDs as if it were an in person concert being shown on the screens.

McGraw was joined by special guests throughout the night. The first was Brad Paisley about 30 minutes into the show to sing “Good Taste In Women” and cover George Strait’s “The Fireman,” which McGraw said he enjoys performing with friends. “Humble And Kind” songwriter Lori McKenna was featured performing the hit on the LEDs in a pre-recorded performance that featured fans singing along to the famous chorus. It was one of the most emotional performances of the night as McKenna thanked fans for making the song a monster hit upon its release in 2015. One might’ve expected wife Faith Hill to make an appearance, but she stayed behind the camera the entire time, as McGraw shared she and daughters were watching from the back.

The concert was interspersed with McGraw speaking about different tracks and thanking fans for watching. He also shared pre-recorded videos that featured McGraw discussing some of the Here on Earth tracks with its songwriters. Fans and special celebrity guests were also shown discussing their favorite songs McGraw has recorded.

McGraw opened with “Here On Earth” and interspersed hits and new tracks, like “LA,” “Hallelujahville,” “I Called Mama,” “War Of Art” and others. Fans also got to vote throughout the broadcast for an exclusive performance that will be released as an Amazon Original in September. No spoilers here. You’ll have to wait to see what uptempo fun song was chosen.

The show will no doubt fill a void for fans who were disappointed by the cancelation of the Here On Earth Tour — or any tour in 2020 — due to COVID-19. While attending shows in person will always be ideal, I’m on board with this “new normal” of livestream concerts, if each are done as well as this one. You can watch from anywhere and still feel like you’re there. I can only imagine livestreams will somehow be incorporated into touring moving forward as artists and their teams have gotten creative during these unprecedented times.

As with any other concert, fans can remember their experience with some exclusvie livestream bundles featuring an event poster, t-shirt, Here On Earth CD and 2x colored vinyl.