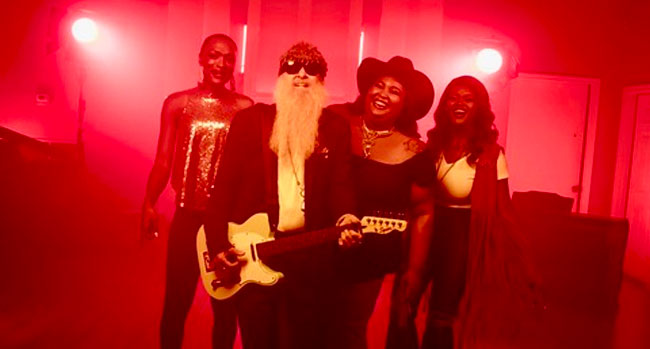 After 50 years of fronting ZZ Top, Billy F Gibbons, has just joined another trio and they’re female! No need to get worked up about this as ZZ Top continues as it has for the past five plus decades. Gibbons has just revealed that he’s loaned himself out to Chapel Hart, a new country trio consisting of sisters Danica and Devynn Hart and their cousin Trea Swindle, for a featured role in the video “Jesus & Alcohol” their debut single, written by the group.

In the video, Danica appears as a bride who is stood up by a no-show groom with Devynn and Trea serving as disappointed bridesmaids. Billy’s role is that of the minister on site to officiate at the wedding. Contemporary country hitmaker JD Shelburne (“Church Pew Barstool”) plays an embarrassed would-be best man with Deborah Allen and T. Graham Brown appearing as guests.

Long known as “Reverend Willy G.,” Gibbons plays a man of the cloth in the “Jesus and Alcohol” video. As with his recurring role in the hit Bones TV series in which he plays a bearded guitar legend, this role is also playing to type. He has performed numerous — he approximates the total as “at least a dozen and cousin..” – wedding ceremonies as an ordained minister in the Universal Life Church. Among the weddings at which he’s officiated are country music legend Billy Joe Shaver’s second marriage (out of a total of five) to Wanda Lynn Canady and at the 2008 wedding of rocker Joe Walsh to Marjorie Bach with Walsh and Bach’s brother-in-law Ringo Starr in attendance along with 15 Tibetan monks. One of the most notable marriage ceremonies performed by “The Rev” took place at a Houston IKEA store when Paul and Patricia Burgess were wed on Valentine’s Day 12 years ago. Gibbons quipped at the time that he was delighted to officiate at a “fully furnished” wedding at which Swedish meatballs were served.

In the “Jesus & Alcohol” video, directed by David Abbott, the Reverend Willy G leaves the bridal party to console himself with a flask stashed in the rectory after the ceremony is called off. Meanwhile, the bride and her friends do the same with a fifth of bourbon until all reunite and receive solace from the bible-thumping and somewhat lubricated Reverend. It’s likely the passage that Gibbons shares with his flock is Proverbs 31:6-7 where it is written

“Give strong drink to the one who is perishing, and wine to those in bitter distress; let them drink and forget their poverty and remember their misery no more.”

Thereafter, a joyous performance of the song with Gibbons on guitar ensues, presumably the intake of the divine spirt(s) making the matter of the wedding that wasn’t all but forgotten in a wash of good cheer.

“I was happy to give the ladies of Chapel Hart my benediction in the video as well as in real life,” Gibbons shares. “They’ve got the talent so however unlikely this drive to make it in country music may appear, their ability is self-evident and I’m happy to pitch in and shine a light, so to speak.”

New Orleans-based Chapel Hart takes its name from Hart’s Chapel Baptist Church in their native Poplarville, Mississippi. Some might think their pursuit of country unlikely with the standard expectation that their music would be R&B-oriented. Trea says they are often asked why they chose country music. Her response, “You don’t really choose it; it was how we grew up and who we are.” She adds, “There is a lot to deal with being African American and singing country music, even in 2020. Country music is simply just in our hearts.”

They had been busking in New Orleans’ French Quarter for a time and were taken under the wing of manager Jeff Glixman who serves as, what Gibbons calls, “the group’s musical consigliere.” He has produced and/or mixed albums from artists ranging from Kansas, to Black Sabbath and The Georgia Satellites and has known Billy Gibbons since the early ‘70s.

Gibbons adds, “I been thinking about the plotline of ‘Jesus & Alcohol.” If Danica’s runaway groom ever comes to his senses and asks for a second chance I’m not sure I’d be willing to perform the service. The guy is missing out on someone terrific, not to mention juxtaposition to certain country stardom. I think he’s probably dumb or clueless or both and clearly unworthy of her.”