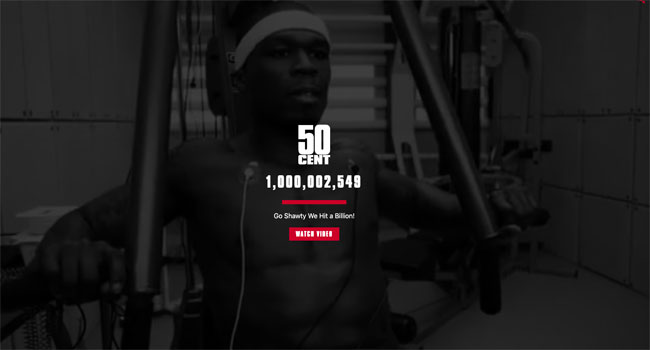 50 Cent’s debut single “In Da Club” from Get Rich or Die Tryin’ via Shady/G-Unit/Aftermath/Interscope/UMe is now officially part of YouTube’s Billion Views Club. Also making its debut, the award-winning music video for “In Da Club” featuring Eminem and Dr. Dre, is now available in 4K, fully restored from the original film.

50 Cent, born Curtis James Jackson III, is an award-winning rapper, entrepreneur, actor and producer from Queens, New York. Recognized as one of the most talented and prolific music artists of his time, the Grammy Award winner rose to fame with his record-shattering debut album, Get Rich or Die Tryin,’ has since sold more than 30 million albums worldwide and has been awarded numerous prestigious accolades. Jackson has leveraged his star power to cross over with unparalleled success as an entrepreneur, actor and producer. From Get Rich or Die Tryin’ being one of the fastest selling albums in history to creating one of the most influential deals in hip hop with the sale of Vitaminwater, Jackson continues to break records.

Reaching one billion views on YouTube, “In Da Club” is the second Rap/Hip Hop music video from the Pre-YouTube era to achieve this milestone, the first being Eminem’s “Without Me.” 50 Cent joins a diverse and elite group of artists from this era to do the same, including Nirvana, Queen, Guns N’ Roses, Whitney Houston, The Cranberries and a-ha.

The video for “In Da Club” was directed by Philip Atwell (Eminem, Dr. Dre, Snoop, etc) and won Best Rap Video and Best New Artist at the 2003 VMA’s and was nominated for Video Of The Year.

Produced by Eminem and Dr. Dre, 50 Cent’s first “official” album Get Rich or Die Tryin’ was released in 2003 and debuted at No. 1 on the Billboard 200. The album featured the hit single “In Da Club,” which reached No. 1 on the Billboard Hot 100 and was nominated for a GRAMMY for Best Male Rap Solo Performance and Best Rap Song in 2004. Get Rich or Die Tryin’ was also nominated for a GRAMMY for Best Rap Album that same year and in 2020, was officially certified 9x platinum by the RIAA and ranked 280 on Rolling Stone’s 500 Greatest Albums of All-Time list.

He currently has the most watched new series on Starz, Power Book II: Ghost, and in January 2020 Jackson received a Star on The Hollywood Walk of Fame and awarded an NAACP award for Best Director in a Drama Series.

Jackson has carved out a thriving television and film career as both a best in class producer and star. In 2005 he founded G-Unit Film & Television, Inc. which has produced a wide variety of content across numerous platforms and sold a myriad of shows to various networks. Among these is the critically-acclaimed No. 1 show on Starz, Power, in which he not only co-starred in, but also served as executive producer and director.

In October 2018, Jackson and Starz/Lionsgate closed an unprecedented deal for Jackson’s G-Unit Film & Television, Inc. The partnership, touted as among the most significant deals to date for an executive producer in premium television, will focus on expansion of the Power universe, with the recently announced spin-offs ‘Power Book II: Ghost,’ Power Book III: Raising Kanan and Power Book IV: Force. Jackson also has new projects in development including BMF Black Family Mafia, which was picked up by Starz in April 2020, Twenty Four Seven on CBS All Access, Female Sports Agent and Moment in Time on Starz, and ABC recently picked up a second season of the series For Life, Jackson’s serialized legal and family drama which premiered February 2020.

Additional credits include the variety show 50 Central on BET and The Oath on Sony Crackle, the network’s most-watched new original series. Jackson’s successful film career has included roles in several blockbusters, most recently Den of Thieves co-starring opposite Gerard Butler, which Jackson has signed on to produce the sequel along with Butler. Jackson has also appeared alongside Jake Gyllenhaal in Antoine Fuqua’s boxing drama Southpaw, Spy with Melissa McCarthy, and reprised his role in Escape Plan 3.

The exceptional businessman serves as CEO of G-Unit Records, which he founded in 2003 and has since signed a host of multi-platinum artists. Jackson continues to dominate the charts with hits like the recently released “The Woo” which peaked at No. 11 on the Billboard Hot 100 Charts, as well as hitting Top 10 on both the Urban (No. 1) and Rhythmic (No. 3) radio charts. “The Woo” also has over 200 million streams on Spotify alone, with the video gaining over 70 million views on YouTube.

50 Cent’s Official Artist Channel on YouTube featured multiple classics throughout November, all remastered in HD for the first time. Titles available now include: “Baby By Me,” “Do You Think About Me,” “OK, You’re Right,” “Get Up,” “I Get Money,” “Straight To The Bank,” “Still Will,” “Ayo Technology;” “Amusement Park,” “Window Shopper,” Best Friend,” “Wanksta,” “P.I.M.P.,” “21 Questions” and “Heat.”