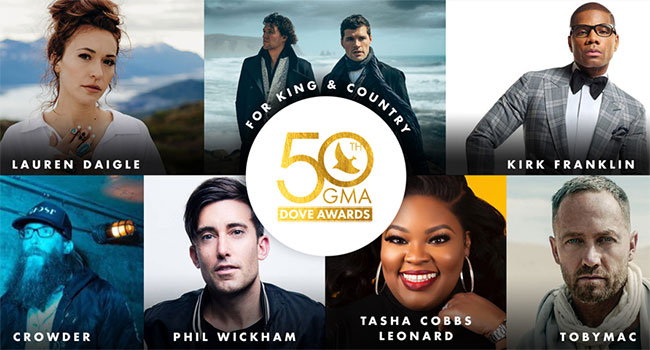 “Congratulations to this year’s Dove Award nominees!” GMA President Jackie Patillo states. “This year, to commemorate our golden anniversary, we will celebrate some iconic Dove Awards moments from the last 50 years. This milestone reminds us all of the extraordinary people whose shoulders we are standing on today and how the sound has evolved over the years!”

The 50th celebration will be a powerful evening of high-energy and unforgettable vocal events paying tribute to 50 years of special appearances and sensational stage highlights over the decades. Performances representing modern rock, rap/hip hop, pop/contemporary, inspirational, southern gospel, Bluegrass, country, worship and more will make up an evening praising the rich musical diversity from the past, present and future of gospel and Christian music. Nominees are determined by GMA’s professional members, and winners will be voted on by the entire GMA membership.

Artist of the Year

Song of the Year

New Artist of the Year

Gospel Artist of the Year

Worship Song of the Year

Pop/Contemporary Recorded Song of the Year

Inspirational Film of the Year