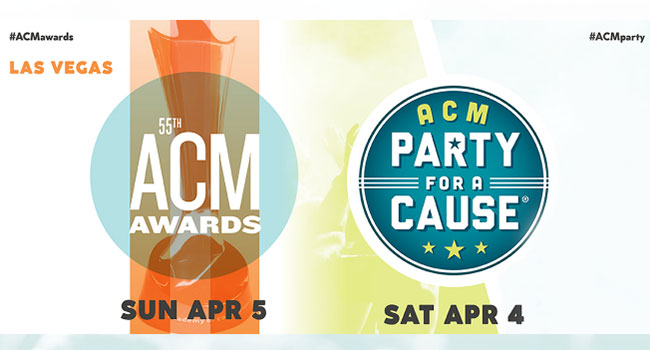 The Academy of Country Music has announced that the 55th Academy of Country Music Awards (ACMs), Country Music’s Party of the Year, will broadcast live from the MGM Grand Garden Arena in Las Vegas on Sunday, April 5, 2020 at 8 pm ET/delayed PT on CBS. The 55th ACM Awards, honoring and showcasing the biggest names and emerging talent in country music, will feature exciting performances, unprecedented collaborations, surprising moments and more to be announced in the coming months.

The Academy is also announcing the return of marquee ACM Party for a Cause events benefitting ACM Lifting Lives on Saturday, April 4th, including the return of ACM Lifting Lives Topgolf Tee-Off with guest hosts Rascal Flatts and Darius Rucker, plus performances from some of the hottest new names in country music and the newly created Saturday night concert event, the ACM Beach Bash Presented by Dr. Pepper at Mandalay Bay Beach with performances by reigning ACM Entertainer of the Year Keith Urban and 11-time ACM Award-winning trio Lady Antebellum, and more to be announced. More details about The Week Vegas Goes Country, including ACM Party for a Cause talent lineup will be announced in the coming months.

Tickets for The Week Vegas Goes Country events, including the 55th ACM Awards and Ultimate ACM Fan VIP Packages, will be available for ACM A-List pre-sale starting Wednesday, September 18th and general on-sale beginning Friday, September 20th at ACMAwards.com. Portions of all ACM Party for a Cause proceeds will benefit ACM Lifting Lives, the philanthropic arm of the Academy of Country Music, which works to lift lives through the power of music.

ACM A-List Members can purchase tickets and VIP packages in a special pre-sale beginning at 10 am PT on Wednesday, September 18th by visiting ACMAwards.com. The pre-sale code will be emailed to all A-List Members prior to the on-sale date.

Tickets and VIP packages will go on-sale to the general public at 10 am PT on Friday, September 20th via ACMAwards.com.

It's time to announce that the 55th #ACMawards and #ACMparty For a Cause will return to Las Vegas on April 4 & 5! Sign-up for the ACM A-List for first dibs at tickets. The pre-sale starts Wednesday, September 18. Here's a look at what we have in store! ✨ https://t.co/8LGbK79Rg2 pic.twitter.com/md2jBTtpkP