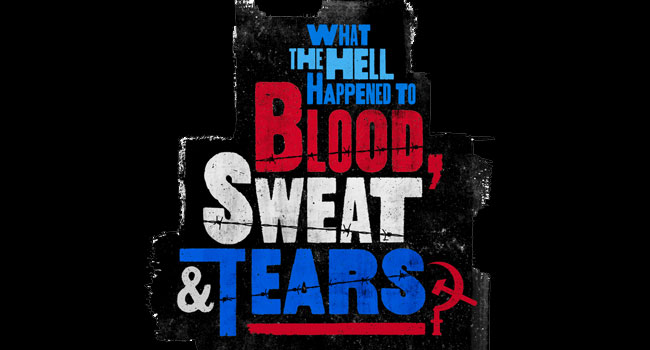 What The Hell Happened to Blood Sweat & Tears? includes never-before-told story of a top rock band

Jesse James Films in association with Crew Neck Productions are producing a fully authorized documentary blending music, politics, social commentary and a mystery involving one of the biggest rock bands of the late 60s/early 70s: Blood, Sweat & Tears. The film, called What the Hell Happened to Blood Sweat & Tears?, will be written, produced and directed by award-winning filmmaker John Scheinfeld (The U.S. vs. John Lennon, Who Is Harry Nilsson (and Why Is Everybody Talkin’ About Him)?, Chasing Trane: The John Coltrane Documentary and The Happy Days of Garry Marshall) who is diving deep into the mystery of what actually happened to the band that suddenly fell from grace at the peak of their fame.

In 1970, Blood, Sweat & Tears was one of the biggest bands in the world. They had exploded on the scene with both daring and promise, selling millions of records, winning multiple Grammy awards including Album of the Year (beating out The Beatles’ Abbey Road) and one of the headliners at the legendary Woodstock festival. In demand for concert and TV appearances, BS&T was a darling of the mainstream and rock press, icon of the counterculture and inspiration for a generation of horn-based bands. Their future was limitless. And then it all went wrong.

“John Scheinfeld is a unique combination of filmmaker, historian and detective,” says BS&T’s Bobby Colomby. “He asked me a simple question: ‘What the hell happened to Blood Sweat & Tears?’ My convoluted answer somehow ignited an engine inside of John that was the beginning of an unexpected adventure: creating a documentary film to reveal the answer to this decades old question. This won’t be your typical music doc, in any way, shape or form.”

A key element of this untold story is that a film crew accompanied the band on their U.S. State Department-sponsored 1970 tour behind what was known as the Iron Curtain, shooting 65 hours of footage and recording many of the group’s concerts to raucously adoring crowds in Communist Yugoslavia, Romania and Poland. The intent was to produce a documentary to be shown in theatres around the world. But the film was never released and the raw footage disappeared. What happened?

During the first months of the COVID-19 quarantine, Scheinfeld began to dig for answers and recently unearthed a 53 minute version of the tour film that raised more questions than answers. Questions that involve the FBI, CIA, Immigration and Naturalization Service, Republicans and Democrats and the secret police of three nations.

What the Hell Happened to Blood Sweat & Tears? will reveal how BS&T found itself victim of the significant societal upheaval and culture wars in an America that was divided as it had not been divided since the Civil War.

This toxic environment, fostered by a rogue Presidency intent on quashing dissent and winning an election, found the band in the crossfire between the Right and the Left and suffered greatly as a result. Although rooted firmly in the past, what happened to Blood, Sweat & Tears has surprisingly strong parallels to the present.

Jesse James Films is a Los Angeles-based production company founded by James Sears Bryant and Jesse Murphy in 2019. JJF is backed by a seven-figure rights acquisition and development fund focusing on mining high profile and high concept intellectual property as the basis of film, television and live stage productions.

This collaboration with Crew Neck Productions marks the company’s first foray into documentaries. According to Bryant, who is financing and will executive produce the documentary, “The untold Blood Sweat & Tears’ journey is rare – it speaks to a generation. The parallels of what we are experiencing in our society today is uncanny and, truthfully, concerning. This story has the uncommon power to entertain and educate – and John Scheinfeld is a prolific filmmaker whose work has consistently excelled at both these callings. Jesse and I have always sought those Black Swan opportunities and candidly, this is it.”

Hope Bryant will oversee production on behalf of Jesse James. The company is represented by 3 Arts Entertainment with Jay Shanker of Crowe & Dunlevy.