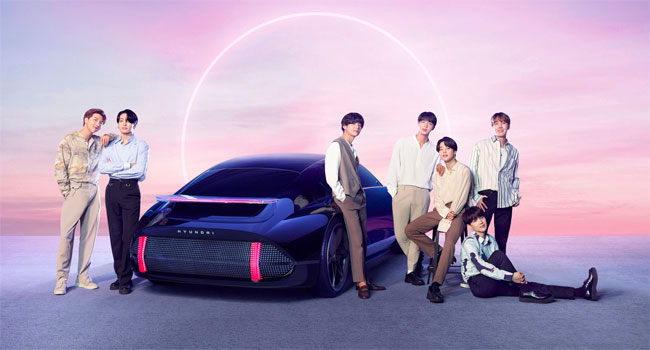 As part of Hyundai’s ongoing collaboration with fellow global superstars BTS, and to celebrate the launch of Hyundai’s new EV brand, IONIQ, the record-shattering group has released a specially-crafted track and video to introduce the innovative brand to the world. The track, “IONIQ: I’m On It,” incorporates the now quintessential shape-shifting pop sound of BTS with slick and catchy melodies, while the reflective lyrics aide in exploring the individual moments fans can experience with IONIQ.

The video, directed by highly acclaimed director, Hanki Goh is beautifully shot using incredibly surreal, dream-like settings in both Seoul and the stunning Jeju Island. The vignette brings together each BTS member taking the viewer on a journey of discovery through the IONIQ experience. This is showcased through seven different moments: Newness (V), Adventure and Challenge (Jung Kook), Inner-self (RM), Hope and Encouragement (SUGA), Emotion (Jimin), Creativity and Inspiration (j-hope) and Effort (Jin).

In true BTS style the video is another grand, mesmerizing, and thoughtful visual accompaniment to the track, with members stylishly conveying the song’s message: that IONIQ can open up the future to limitless possibilities and potential.

“IONIQ: I’m On It” by the chart-dominating seven piece aims to raise awareness of the new EV brand in an extraordinary way, introducing IONIQ to the public through a fun, upbeat sonic effort created especially by one of the world’s biggest acts.

Downloadable for free from Hyundai’s website, “IONIQ: I’m On It” highlights how with IONIQ, the future is opened-up to limitless possibilities and potential. The two and a half minute track will also see a dedicated music video filmed against the dreamy surrealist backdrop, bringing to life each member of BTS’ IONIQ experience.

Alongside the song and music video launch, Hyundai is also introducing a limited edition merchandise giveaway, producing a cassette-designed mp3 containing the song and BTS members’ individual messages to fans.

“Change always starts small at first, but we feel things are really starting to change with eco-friendly technology. [We] think we’ll look back and realise IONIQ was one of the starting steps. What we love is this idea that if you work harder and harder, it’s possible to see and create new opportunities and rewards for the future,” the K-pop group says.

They continue, “We had a lot of fun filming this video. It’s been a while since a music video style ad has come out like this. It didn’t feel like a commercial shoot. It felt like an actual music video shoot.”

The launch of the IONIQ brand for dedicated Hyundai EV models reinforces the company’s commitment to clean mobility and reflects its ongoing transformation as a Smart Mobility Solution Provider with zero-emission solutions.

BTS, an acronym of Bangtan Sonyeondan or “Beyond the Scene”, is a South Korean boy band that has been capturing the hearts of millions of fans globally since their debut in June 2013. The group is the first Korean pop act to top Billboard’s Hot 100 chart with their first-ever English single, “Dynamite.” It captured 33.9 million U.S. streams and sold over 300k copies, marking the biggest digital sales week in nearly three years since Taylor Swift’s “Look What You Made Me Do” launched in September 2017.

Its music video reached new heights on YouTube, amassing 101.1 million views within 24 hours after its release and garnering over three million peak concurrent viewers immediately upon release. The song has also topped the iTunes charts in 104 regions, and Spotify’s “Global Top 50” chart, the very first for a Korean act.

They recently performed “Dynamite” for the first time at the MTV Video Music Awards, where they won all four categories they were nominated for including Best Pop, Best Group, Best K-Pop and Best Choreography.