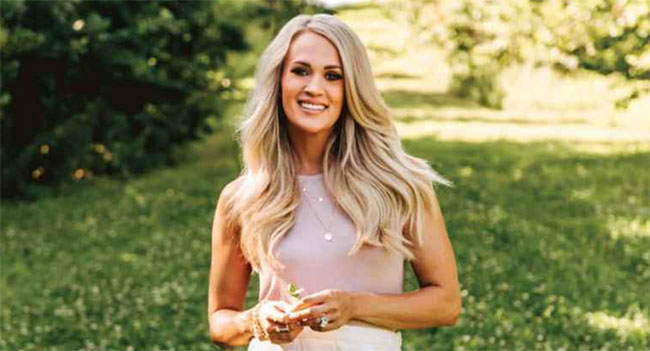 Carrie Underwood is working on a Christmas album for 2020. The country superstar shared the news during her first ever Virtual Fan Club Party on Wednesday (June 3rd) that replaced the in person one that was scheduled during CMA Music Fest, which was canceled due to COVID-19.

During the Q&A portion of the hourlong celebration, Underwood shared that the album has been in the works, and mostly finished, before the pandemic. While she didn’t reveal further details, she is planning to revisit the project as soon as possible and plans to release it ahead of the 2020 holiday season.

The virtual celebration saw Underwood perform a thirty minute acoustic set composed of album tracks for more than a thousand fans while sitting on a leather couch in a guest house on her Nashville area property. She was joined by her guitarist Matt Reviere, who was sporting a face mask behind Underwood, as they practiced social distancing.

In 2007, Underwood released a special Walmart edition of her sophomore album, Carnival Ride, with a bonus disc of Christmas tunes. The set contained five Christmas favorites, four which were previously unreleased at the time, including “Hark! The Herald Angels Sing,” “The First Noel,” “What Child Is This,” and “O Holy Night.” The fifth track contained Underwood’s rendition of “Do You Hear What I Hear,” featured on Hear Something Country Christmas, a multi-artist project released a year prior.

No word on what tracks will be contained, the album’s time or release date at press time. More details as they becomes available.

Her first Christmas album follows her first book, Find Your Path: Honor Your Body, Fuel Your Soul, and Get Strong with the Fit52 Life, that was released before the pandemic in March. Upon its release, the book became an instant New York Times bestseller, entering the highly-competitive Advice, How-To & Miscellaneous list at No. 2. Additionally, the book hit No. 1 on Amazon during its first week of publication and is currently No. 3 on Amazon’s “most sold” nonfiction chart.