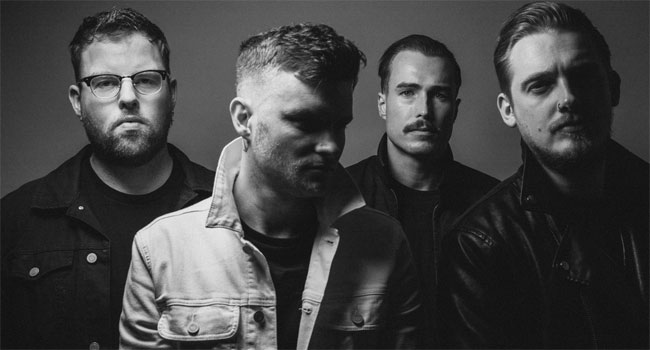 Inside Job/Entertainment One (eOne) and Aberdeen, Scotland-based rock quartet Cold Years are excited to present “Life With A View,” the latest track from the Friday, September 4th release of the band’s highly anticipated, forthcoming debut album, Paradise. With a heavy nod in particular to muscular, blue-collar, windows-down Jersey rock, “Life With A View” is the driving centerpiece to Paradise and a piece of advice given by frontman Ross Gordon in that you don’t have to spend your life accepting misery as your reality.

As the true sound of worldwide youth disaffection post-Trump and post-Brexit, the songs of Paradise – a sarcastic snarl aimed at the band’s remote hometown – burst from the speakers with a “clear eyes, full hearts, can’t lose” spirit. Springboarding off timelessly vintage sounds and fueled by large choruses buffed through a modern-day, blue-collar punk sheen, Paradise captures the anger and frustration the quartet feels for a generation in decline.

Echoing the infamous, despairing “it’s shite being Scottish” rant made by protagonist Renton in Irvine Welsh’s 1993 novel, Trainspotting, Cold Years frontman Ross Gordon’s near-nihilistic take on the town where he was born goes further still, almost three decades and a generation later. Rather than succumb to the pitfalls that laid waste to previous generations, however, he poured all of his grievances into his band’s debut showcase, Paradise – 13 songs of passion and belief that unapologetically breathe the redemptive fire of rock and roll.

“There’s an ongoing narrative about how fucked everything is at the moment,” Gordon says of the thread that ties otherwise disparate themes together. “It links everything, really, not just purely politics: It’s linked to the economy, to drugs and alcohol, and what our generation is going through right now. You work hard in school, you train for your career and you try to succeed at it, but the reality is that none of it really fucking matters. It’s a record that’s angry because, as a generation, we feel like we’ve been sold short.”

Naturally, the creation of an album instilled with such an inflamed sense of injustice didn’t come without its difficulties. It was a challenging process that often tested the collective patience of the quartet, completed by guitarist Finlay Urquhart, bassist Louis Craighead, and drummer Fraser Allan. But such was the passion that each member invested into it, paired with an indomitable spirit, that the band has made good on the past few years of promise. Rather than rushing out a record for the sake of expediency, taking time to reflect, be honest, and pour everything the band had into the process has made for a set of songs that will endure and stand the Scots in admirable stead. After all, you only get one shot at making your first album, so you better make it the best it can be.

Considering the unforgiving, harsh, and often dismal depths from which Paradise was born, it’s an album that strives for optimism, and Cold Years know who they are and staying true to their roots. And despite a journey ahead that promises to send them far and wide, they won’t ever forget where they came from even if it is rubbish.

“I went through a divorce, different jobs, different flats, different girls … And I tried to cover everything that’s happened in the past few years,” Gordon says of the self-examination he underwent on these tracks. “I really am grateful for the opportunity that we’ve got. Every single day. It’s a huge thing. It’s going to be a lot of work, but it’s meant to be hard because nothing worthwhile doing is ever easy. We worked really hard on this record. We had to, and I’m proud of it.”