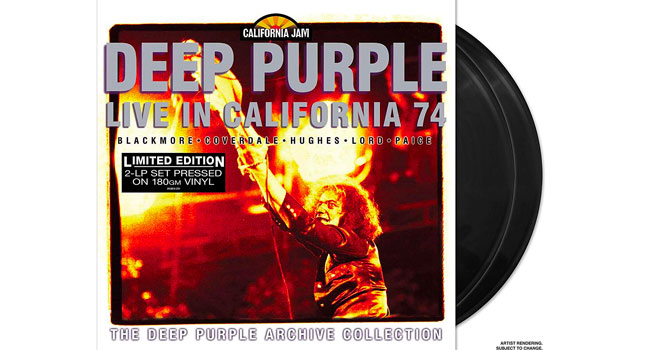 Mercury Studios is releasing Deep Purple Cal Jam – Live in California ’74 on 2 LP 180-gram vinyl on February 19th as part of the Deep Purple Archive Collection. It makes its vinyl debut 47 years after the concert that saw hits like “Burn,” “Space Truckin’,” and “Smoke On The Water” performed  in front of 200k people at Ontario Speedway in Ontario, California.

Deep Purple was the biggest selling album act in America when they embarked on a 28 date tour promoting their
eighth studio album Burn, which was the first to feature pre-Whitesnake vocalist David Coverdale and post-Trapeze bassist and vocalist Glenn Hughes trading vox throughout its eight songs. The California Jam Festival was the undoubted climax of this tour that also included co-founder Ritchie Blackmore on guitar, Jon Lord on keys and Ian Paice on drums.

Burn reached No. 4 in four European countries, but only No. 3 in their UK home country and No. 9 on the Billboard 200 in the United States.