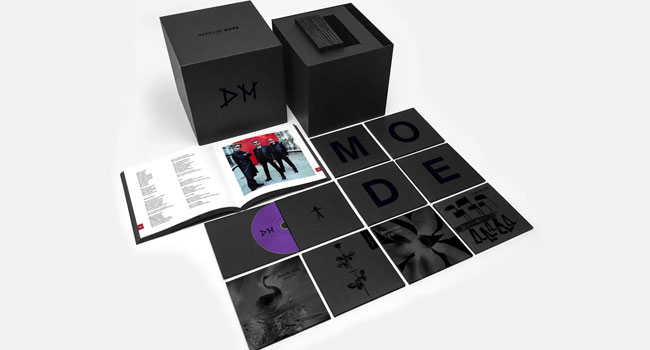 Depeche Mode will release Mode, a comprehensive CD collection of the band’s work to date, comprised of all 14 studio albums plus additional non-album material, on January 24th. The numbered, limited edition set is housed in an elegant and minimalist 7″ x 7″ black cube, with each disc similarly enclosed in a black, heavyweight card wallet. The albums’ original covers have been re-interpreted in uniform black-on-black designs exclusive to this box set, and four additional bonus discs provide a chronological collection of non-album singles, b-sides and bonus tracks from 1981-2017, including the previously unreleased “Heroes” (Highline Session Version).

Accompanying the audio content is a 228 page, gilt-edged book containing all of Depeche Mode’s lyrics, compiled together for the first time, highlighting their collective visceral power and impact.

“With everything together in this all-black design it feels like a modern reflection of who we are and where we’ve come from,” the band says of the package. “The set couldn’t be more Depeche Mode.”

The impact of Depeche Mode’s music on their fans, and the musical landscape as a whole, is undeniable. By constantly evolving and pushing boundaries, while staying dedicated to their identity, Depeche Mode have maintained credibility with longtime followers, attracted new fans and continually inspired countless other musical artists. As the band continues this musical legacy, the Mode box set celebrates this history with an eye to what is still to come.

The set follows the band’s numbered, limited edition, vinyl box set series, Depeche Mode | The 12″ Singles. Each boxed set in the series contains the singles from each Depeche Mode album on audiophile-quality 12″ vinyl, with audio mastered from the original tapes. The artwork for the exterior of each of the boxed sets draws on iconography inspired by the original releases, while the vinyl sleeves themselves feature the original single artwork.