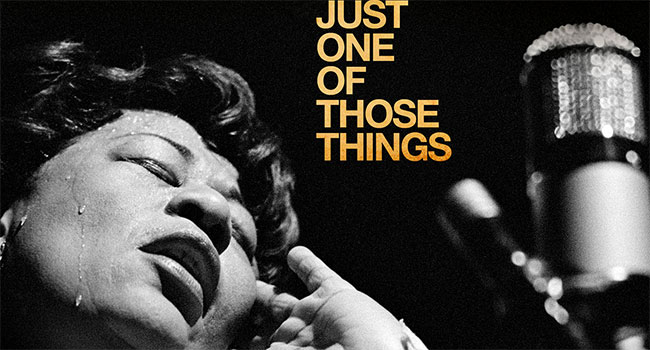 Eagle Rock Entertainment has postponed the Ella Fitzgerald: Just One Of Those Things documentary due to the coronavirus pandemic. The film was set to open in select cinemas across the U.S beginning April 3rd.

“In light of recent events surrounding COVID-19, all theatrical screening dates of the documentary film Ella Fitzgerald: Just One Of Those Things are being postponed at this time. New dates will be announced in the future.”

Just One Of Those Things presents, through an intimate lens, Ella Fitzgerald through all of her moments of triumph and joy, delivering a clear picture of the woman Ella was both on and off the stage. Featuring never-before-seen footage, the film includes interviews with Smokey Robinson, Tony Bennett, Johnny Mathis, Norma Miller, and a rare conversation with her son, Ray Brown Jr., among others.

Known as “The First Lady Of Jazz,” Ella Fitzgerald’s sublime tone, emotive delivery, and supreme improvisatory scat vocalizations laid the groundwork for generations of vocalists. A pillar of American music history, Ella is an international icon, earning 13 Grammys and selling over 40 million albums in her six-decade spanning career. Additionally, she was awarded the NAACP Equal Justice Award, American Black Achievement Award, and several other honors for her accomplishments in both the jazz world and the civil rights movement. An inspiration for generations to come, Fitzgerald used her talent and intelligence to break down seemingly impenetrable barriers.

Just One Of Those Things examines how she developed that tenacity. Losing her mother at the age of 15, Fitzgerald endured life in abusive reform schools before escaping to the streets of Harlem, penniless and alone during The Great Depression. In 1934, she won a talent contest at the famed Apollo Theater — a moment that changed the course of her life. Within months, she was a star. Pioneering a prosperous career amidst immense racism, poverty, sexism, and body image criticism, Fitzgerald forged ahead as a female bandleader, working with such contemporaries as Frank Sinatra, Dizzy Gillespie, Louis Armstrong, and Benny Goodman. However, outside of the spotlight, Fitzgerald was a very private person, conflicted with reconciling her public image and hunger for adoring audiences with a longing for domestic life with her husband and son. Throughout the documentary, we follow Fitzgerald as she endures these conflicts while carving her revolutionary path in music.

Just One Of Those Things explores the resilient, humorous, and witty woman who spun her rough past into pristine musical gold.