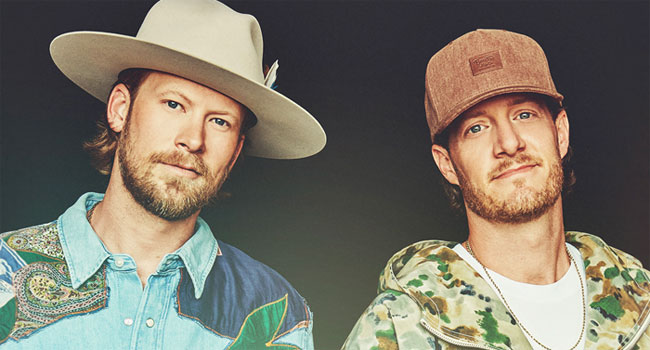 With “Cruise” (RIAA 11X platinum single) and “Meant to Be” feat. Bebe Rexha (RIAA 10X platinum single) both officially certified diamond singles, the latter is only one of six songs in the past four years to achieve RIAA diamond. Only 43 singles have reached diamond status in RIAA Gold and Platinum history. Since their breakout in 2012, FGL’s total digital single awards is at 54 million.

“Thank you guys for the recognition and this ride has been a dream come true,” shared FGL’s Brian Kelley. “It’s pretty crazy hearing the numbers. It’s pretty wild to think about it in that time span. Just super grateful. Thank y’all for taking the time and celebrating us, but know that celebrating us is celebrating y’all ‘cause it is all of us. I think we’ve all been doing this together and riding this wave since day one, so thank you guys.”

“It is surreal and it is nice to take a second to let that sink in, and honestly we’re so thankful,” added FGL’s Tyler Hubbard. “It’s awesome to know it’s connecting. When I hear those numbers that’s what I hear, and I just think that’s something that we can all be proud of. Thank y’all for being a part of this team. We’re humbled by it, we’re really extremely motivated, we’re all in a great headspace, and we’re feeling really creative and all this does is inspire us even more. Thanks everybody on this call and thank you for taking the time to recognize that, it’s really special.”

In addition to the double Diamond Single Awards, the superstar duo was celebrated for seven more milestone certifications including: Can’t Say I Ain’t Country, “Blessings” and “I Love My Country” earning gold certifications; “Simple” and “Talk You Out Of It” earning 2x platinum; and “H.O.L.Y.” and “This Is How We Roll” both earning 6x platinum.

Nominated for fan-voted Favorite Duo or Group – Country at ABC’s 2020 American Music Awards, FGL will usher in the holidays with a debut performance of “Lit This Year” on ABC’s CMA Country Christmas and Hubbard is set to reunite with Nelly for buzzworthy collaboration “Lil Bit” on ABC’s Good Morning America.