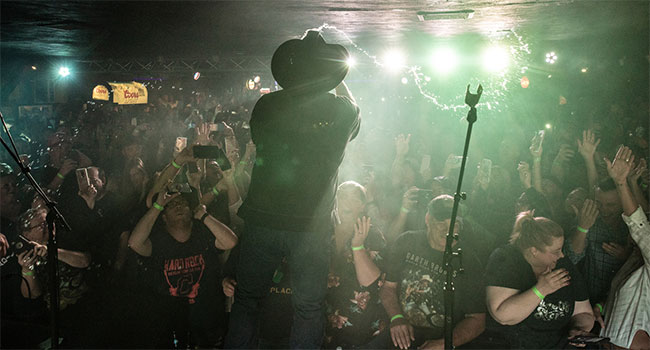 It was a wild good time at Garth Brooks’ fifth Dive Bar concert at The Dusty Armadillo in Rootstown, OH. The place was packed to capacity with over 700 people as country radio stations all across the nation were given the chance to send contest winners.

In an epic first time event, Brooks went live on Inside Studio G, his weekly Facebook live series, for the entire finale of the concert featuring the last part of “Friends In Low Places” and “The Dance.”

This was the fifth of seven Dive Bar concerts. The first was at Joe’s on Weed Street in Chicago in July. The second was at Buck Owens’ Crystal Palace in Bakersfield, CA, in August. The third was at Gruene Hall in New Braunfels, TX. The fourth one was The Barn in Sanford, FL earlier this month. Brooks is set to announce the final two dates soon with the seventh one being announce next week on Inside Studio G.

The Dive Bar Tour is inspired by Brooks’ latest single “Dive Bar” featuring Blake Shelton. The “rowdy” (Rolling Stone) and “anthemic” (Billboard) new song was the most added song at country radio upon its debut and is taken from Brooks’ forthcoming studio album Fun, and is his first musical collaboration with Shelton. Fun, which was set for release in 2019 has been pushed back to spring 2020 as his first ever vinyl collection, Legacy, will be available on November 1st.

Brooks is also in the midst of his record-breaking, “turbo-charged” (Variety) three year stadium tour. The final concert for this year will be at Neyland Stadium in Knoxville, TN! It will be the tenth stop on the tour, which has been mass averaging just over 83,000 tickets in each city with more than 830,000 tickets sold to date.