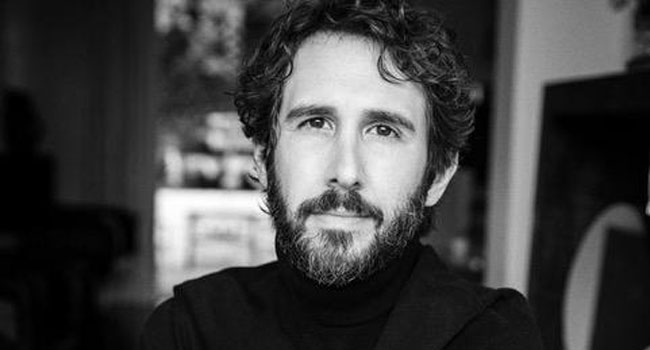 Global superstar Josh Groban announces Harmony Deluxe, out February 26th via Reprise Records. The brand new deluxe edition is an expansion of his ninth studio album, Harmony, which was released late 2020. The record features six additional renditions of timeless classics, including “Nature Boy” (written by eden ahbez and performed by Nat King Cole), a GRAMMY Hall of Fame recipient; “April Come She Will” (written by Paul Simon and performed by Simon & Garfunkel); and a special guest performance from acclaimed German artist Helene Fischer performing with Groban on “I’ll Stand By You” (written by Chrissie Hynde, Tom Kelly and Billy Steinberg and performed by The Pretenders).

Groban’s new single “Angels” will be coming on February 1st, accompanied by a gorgeous, cinematic music video, shot in LA and directed by Gus Black (Sheryl Crow, Phoebe Bridgers, Gary Clark Jr.), that captures the beauty of love and human connection, that we all need more than ever during this time. “Angels” follows his previous single, “Celebrate Me Home,” which reached No. 1 on the AC charts just before Christmas 2020.

Additionally, Groban also announces a special Valentine’s Day livestream concert. Shot in Los Angeles, the show will first air in North America on Sunday, February 14th at 8 pm EST/5 pm PST. The show will then play on Monday, February 15th at 8 pm GMT and 8 pm AEDT. The concert will also be available to watch on-demand for 48 hours after the airing ends in each timezone.

For the performance, Groban will be offering special tickets that you can gift to friends and family, as well as exclusive merch bundles, including an event t-shirt, hoodie, and a personalized signed lithograph.

Originally released in November 2020, Harmony finds Groban performing a collection of timeless songs along with two originals, showcasing his unparalleled vocal prowess. The album includes classics such as “The Impossible Dream,” “Angels,” “I Can’t Make You Love Me,” “Celebrate Me Home,” “She” and many more. The record also features guest performances from Tony Award®-winner Leslie Odom Jr (Hamilton), performing with Groban on the song “Shape Of My Heart;” and a performance from GRAMMY Award-winner Sara Bareilles, performing with Groban on the classic Joni Mitchell song, ”Both Sides Now.” GRAMMY Award-winner Kirk Franklin brings his unique blend of energy, gospel, and choir to a brand new original song, ”The Fullest.”

Last fall, Groban also took fans on a virtual concert “tour” with a series of intimate concerts filmed in-person and live streamed directly to 85 countries around the world. Groban kicked off the series with a concert of Broadway favorites on October 3rd. Following that, he performed a concert to celebrate the release of Harmony on November 26th (Thanksgiving Day), and wrapped up the series with his first-ever holiday concert on December 19th.

HARMONY DELUXE TRACKLISTING
The World We Knew (Over and Over)
Angels
Celebrate Me Home
Shape of My Heart (Duet with Leslie Odom Jr.)
Your Face
Both Sides Now (Duet with Sara Bareilles)
She
The Impossible Dream
The First Time Ever I Saw Your Face
It’s Now or Never
I Can’t Make You Love Me
The Fullest (feat. Kirk Franklin)
Nature Boy
I’ll Stand By You (Duet with Helene Fischer)
April Come She Will
I Can See Clearly Now
Con Los Años Que Me Quedan
Solitaire

Van Zant to release only recorded concert together