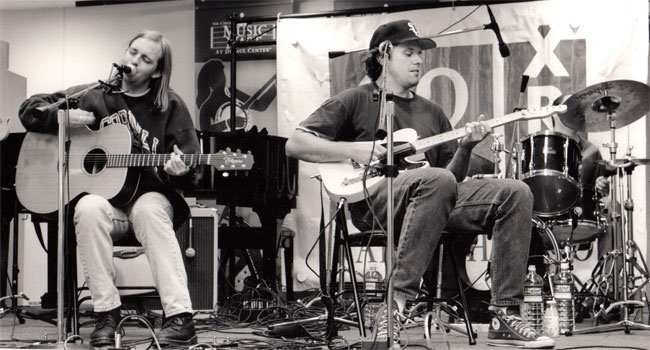 July 10th marks the triumphant return of one of the most coveted folk rock bands of the 90s, Billy Pilgrim. The duo, composed of Andrew Hyra and Kristian Bush (Sugarland, Dark Water), announce the release of a new album coming September 4th, titled In The Time Machine, featuring unreleased tracks from the vault, including the new single “Call It Even,” available now.

Nearly two decades ago, Billy Pilgrim recorded this collection of songs, set to be their third studio album release, but the master tapes burned in a fire in late 2000 at Nickel & Dime Studio near Decatur, GA. Fortunately or not, one copy remained, and from it, about 500 CDs were pressed and sold at a 2001 performance at Eddie’s Attic, the Atlanta haven for acoustic music. Following that concert, Billy Pilgrim’s Kristian Bush and Andrew Hyra went their separate ways – never disbanding, but also never speaking for the next 15 years. “I remember thinking to myself, man, this band isn’t finished,” Bush says. Fast forward to 2020, during the worldwide pandemic, Bush discovered the lone copy while cleaning out his home during quarantine. This fall, that collection of music will finally receive the attention it deserves, as it becomes available to fans on all streaming platforms.

Along with Bush and Hyra, the musicians featured on In The Time Machine are Brandon Bush (Sugarland, Train) on keyboards; David LaBruyere (John Mayer) on bass; Joey Craig on guitar; and Sigadore “Siggy” Birkis (John Mayer), Marcus Petruska (Corey Davis) and Travis McNabb (Better Than Ezra) on drums. Producer/engineer Don McCollister, who owned Nickel & Dime Studio, co-produced the album along with the Bush brothers and Hyra.

A 90s cult classic, Billy Pilgrim’s music was featured as the soundtrack to some of the decade’s most iconic television scenes, on dramas like Melrose Place, My So-Called Life, and many more. With today’s obsession of the fashion, television, and of course, the music from that moment in history, the uncovering of the lost Billy Pilgrim archive couldn’t have come at a better time.

As for “Call It Even,” the track speaks to redemption and in an almost prophetic way, nods to this music’s second chance at life. “It’s quite a thing to sabotage your opportunities,” Hyra confides. “As you get older, It’s quite a bit more of a thing to realize that you sabotaged others. I’ve always loved this recording and song for as grounded as it is in forgiveness. Forgiving oneself and everyone in your life is such a profound expression of love and this song represents that sentiment so well.”

As much as the reunion commemorates Billy Pilgrim’s creative past, it also looks towards a collaborative reunion for the future; a sentiment needed perhaps now more than ever.

“This is a very honest way to re-approach this album. We left off in this moment,” shares Bush, “and this is the moment we want to start back with again.”