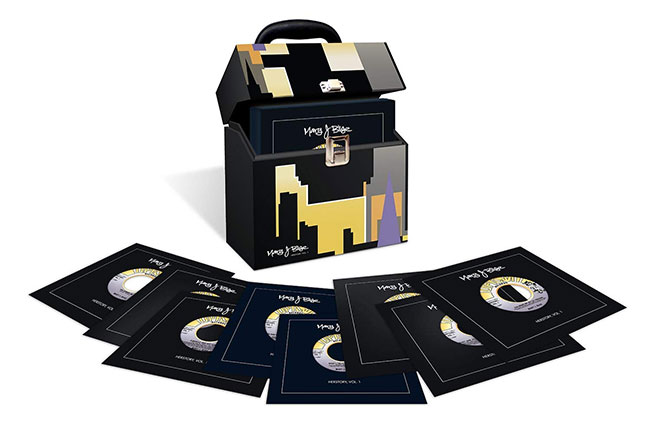 Mary J. Blige will release an immersive box set of her biggest 1990’s hits along with rare remixes, HERstory, Vol. 1, on December 6th via UMe. The collection will be released in three physical forms: a set of eight standard-weight black 7” vinyl records, a single CD version, a 2 LP set and a digital version. From her solo 1992 hit “You Remind Me” to the 1993 remix of “What’s the 411” featuring K-Ci (of K-Ci and JoJo) and the Notorious B.I.G., HERstory, Vol. 1 tells the story of Blige as she first established herself as a tour de force of 90’s R&B.

Born in the Bronx and raised between Savannah, Georgia and Yonkers, New York, Blige caught the attention of Andre Harrell, co-founder of Uptown Records in 1988 when she recorded a cover of Anita Baker’s 1986 ballad “Caught Up in the Rapture” at the Galleria Mall in Westchester, New York. After a few years as a backing singer for Uptown artists like Father MC, she launched from the projects to stardom, recording her 3x platinum 1992 debut, What’s the 411?, with Sean “Puffy” Combs behind the board. 411’s singles “You Remind Me,” “Real Love,” “Reminisce” and “Love No Limit” are represented on HERstory, Vol. 1; the first in its original form, the latter three in remixes previously unreleased on 7” format.

Blige followed up her classic debut with another knockout, My Life, which featured the singles “Be Happy,” “I’m Goin’ Down,” “Mary Jane (All Night Long),” “You Bring Me Joy” and “I Love You.” Like its predecessor, My Life went 3x platinum and gained rave reviews; Billboard called the album “sterling” and “You Bring Me Joy” “full of giddy street romance.” All five singles appear on the box set; “Mary Jane” in an LL Cool J and Diddy-assisted remix, and “I Love You” featuring the hip hop duo Smif-N-Wesson. Also featured is “I’ll Be There for You/You’re All I Need to Get By,” Blige’s 1995 duet with Method Man that won a Grammy Award for Best Rap Performance by a Duo or Group and rocketed to No. 3 on Billboard’s Hot 100.

“Can’t Knock the Hustle,” the opening track on Jay-Z’s 1996 debut Reasonable Doubt, featuring Blige is featured on the CD and 2 LP versions. Blige wasn’t originally slated to appear on the song; when the plan for dance singer Veronica Vasquez to sing on “Hustle” fell through, Blige came through — and instantly made her mark on rap history. HERstory, Vol. 1 is full of these moments, in which an all-time great of R&B and hip hop soul coalesced a variety of influences and became a global symbol of female empowerment and perseverance.

HERstory, Vol. 1 provides the definitive look at the Queen of Hip-Hop Soul’s early days — and in three unique formats, is not to be missed.