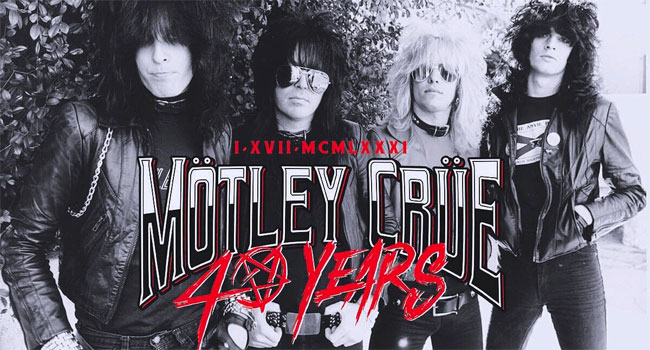 Motley Crue is celebrating its 40th anniversary starting today (Jan 17th). It was January 17, 1981 when Nikki Sixx first jammed with Tommy Lee and vocalist/guitarist Greg Leon. Leon left, Mick Mars and Vince Neil were recruited. The rest, as they say, is history as they became known as the World’s Most Notorious Rock Band.

“In ‘Kickstart My Heart’ the lyrics say, ‘When we started this band / All we needed, needed was a laugh / Years gone by, I’d say we’ve kicked some ass.’ It’s always been about great songs and over-the-top live shows for us. The fans were always right by our side. I don’t know where all of the years went. It went by in a flash. What I can’t forget, are the four decades of fans who have counted themselves as CRÜEHEADS from day one, supporting us through thick and thin. To them we are in debt and thank you from the bottom of our hearts. Happy 40th Birthday to us all,” the band shares on social media with a celebration video.

The band confirms that the yearlong celebration will see “exciting releases, collectors items and Crüe madness on the way,” with more details to be announced. Fans are encouraged to “sign” their birthday card by commenting on this post or sharing a video and tagging them on Instagram.

They can also pick up a limited edition poster of Too Fast For Love, celebrating the group’s debut record, that is officially licensed by the Crue. The posters were designed by Luke Preece and are hand numbered. They are available in standard and as a foil variant.

The band that called it quits at the end of 2015 with a Cessation of Touring agreement was set to reunite for The Stadium Tour with Def Leppard, Poison and Joan Jett & The Blackhearts last summer, but were forced to postpone it due to the pandemic. New dates are currently set for summer 2021, but are subject to change due to COVID-19 restrictions.

The group decided to destroy the agreement after spawning a new generation of fans since Netflix released The Dirt, the film based on their 2001 autobiography of the same name last spring. Upon its release, the band immediately became the top searched topic on Google Trends with a 4300% spike in searches and saw a huge increase in streams on Spotify, Apple Music and others.

The film became the highest audience rated film on Rotten Tomatoes became a No. 1 film for the streaming service which also reported its biggest ever subscriber growth earlier this year. The Dirt Soundtrack, which the band recorded four newly recorded songs, on Mötley Records and Eleven Seven Music, immediately reached No. 1 on the iTunes All Genres Chart.