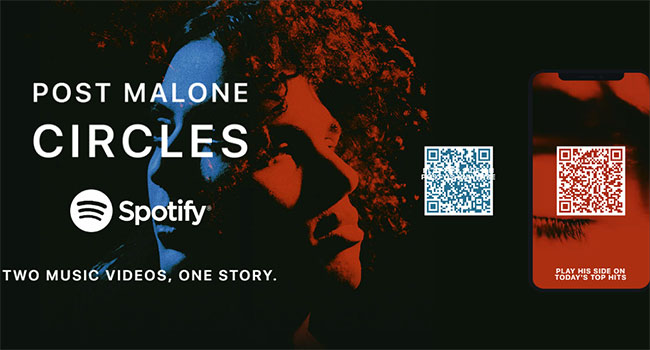 Post Malone has teamed with POWSTER, an award-winning interactive creative studio/production company for over 150 movie distributors, for the launch of an innovative, synchronized dual-phone music video for his breakout song “Circles,” only available on Spotify.

The Digital Marketing & Innovation department at Universal Music Group pioneered this groundbreaking presentation and concept alongside Post and Powster. Using innovative storytelling and production techniques, fans can view the entire dual-phone video story through two phones placed side-by-side. While the videos each work alone, viewers can only see the full story when two phones are placed side-by-side, revealing the tale of a couple continually breaking up and getting back together — going in “circles.” Much like a real relationship the activation needs two people to work together to see the full picture.

POWSTER utilized cutting-edge technology and video production methods, such as using close-up stylized studio shots and stylized film gradients shot specifically for vertical video, to create a captivating synchronized video that works individually and can also reveal the full story by playing the song in unison with a second phone. As it plays, the visuals seemingly move between the two phones.

“This content shows an artistic and innovative approach to Spotify by Post Malone, who is capitalizing on the value of featuring unique content tailored to the platform he engages in. This visual innovation goes the extra mile with bespoke vertical content shot specifically for Spotify, utilizing the new Spotify vertical video feature in a cutting-edge way,” states Ste Thompson, CEO and Creative Director of Powster. “Post Malone’s music isn’t living by just one music video, rather communicating the message of the lyrics with multiple collaborations, using platforms to their full potential, and pushing boundaries other artists have yet to explore. We’re excited to be working with Post Malone and provide content enabling him to create meaningful connections with fans.”

“Circles is about heartache and relationships, and between the music and the visuals, this content is truly an art piece designed to augment the music, encompassing the emotions and sentiments that Post Malone sings about,” says George Harb, Vice President, Digital Marketing & Innovation at Universal Music Group. “This aligns with Post’s desire to create art around his music. This content is an innovative and captivating visual companion to the song. We want fans to stream his music and elicit emotion, which this helps accomplish, as well as reach more fans through novel artistic expression.”

The video’s first phase invites viewers to follow the couple individually across the two screens via imagery of two separate people doing similar activities such as partying and dancing. The close-up shots draw viewers into the couple before they meet. Once the couple joins together, sparks fly. The interconnectedness of the piece is revealed as the devices are magically connected as the characters and actions move freely across both screens. Using double exposure, the couple is closest — literally on top of each other — soon after contrasted by the final phase of the synchronized video when the juxtaposition of images are mashed together, symbolizing the break-up.

The synchronized dual-screen experience is available on all devices with the Spotify App and can be accessed at circles.postmalone.com.