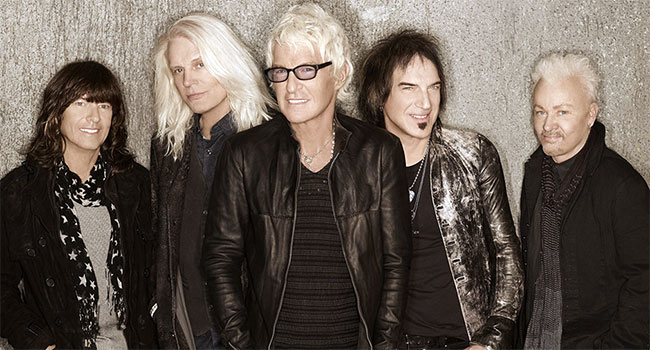 The band performed to a sold out crowd at the St. George Theater

Roll with the Changes? There haven’t been any in 30 years for classic rock icons REO Speedwagon, who bowled over fans with a high-energy set last night (Sept 25) at the St. George theater on Staten Island.

It was the band’s first time in the New York City borough. “I thought we’d played all the places there are to play, then we roll up in front of this beautiful venue!” lead singer Kevin Cronin told the audience.

REO opened with a four song string of hits, without taking a break in between them. “Don’t Let Him Go,” “Music Man,” which bled into two more before Cronin and crew finally stopped to welcome the crowd.

The stage set was awesome, and pretty involved for a theater show. Their risers, obviously custom built to allow drummer Bryan Hitt and Neal Doughty to co-exist peacefully, lit up in all manner of LED colors. Their backdrop, a curtain with an industrial steel pattern emblazoned with REO’s winged logo, also lit up.

The aforementioned Doughty has been with REO Speedwagon since its very beginning — over 50 years. Lead singer Cronin joined in 1973, and except for a brief three year hiatus, has been with the band full time since 1976. Bassist and vocalist Brue Hall joined a year after Cronin came back. Drummer Hitt and lead guitarist Dave Amato are the new guys. They’re celebrating a 30 year tenure this year.

“Can’t Fight This Feeling,” proved that Kevin Cronin can still carry those high notes, if with a breathier sound in them than before. Like these classic power ballads REO is known for, his voice is aging just as well.

Kevin Cronin’s skills as a musician were best on display during his two song acoustic set. “Golden Country” and “Building the Bridge” are both message songs, hammered home by the bare simplicity of their arrangement.

REO Speedwagon’s original mega-hit “Take it on the Run” began a driving four song main set closer, during which the band vamped, pumped the crowd, and shook their hair. Something happened in those final moments — we were all transported back to the 80’s, no Delorean needed.

The band came back to play three more songs, their biggest hits: “Keep on Loving You,” and “Roll with the Changes.” Again, the music was the time machine, proving that honest-to-God classic rock is here to stay, no matter the era. The now 67-year-old Cronin articulated this best from the stage when he told the audience, “I think you and I are living proof that rock and roll keeps you young forever!”