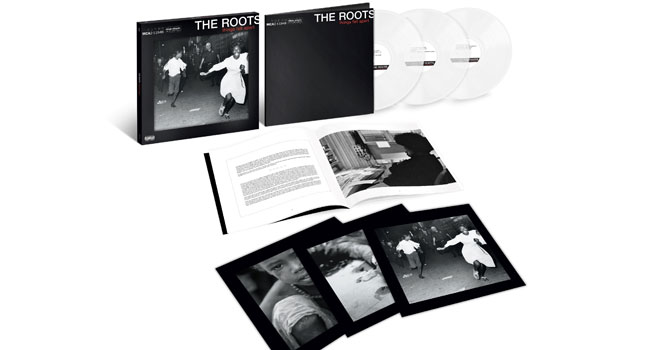 In honor of its 20th anniversary, The Roots’ breakthrough fourth album Things Fall Apart is available once again via Geffen/Urban Legends. This melancholy gem of 2000’s alternative hip hop, originally released on MCA Records in 1999, has been freshly remastered and repressed in two lavish physical configurations, a standard black 3 LP, a limited edition crystal clear 3 LP as well as a digital collection, all to be released September 27th.

Things Fall Apart, named after Chinua Achebe’s 1958 novel about the 19th century Scramble for Africa in which European imperialists invaded Nigeria (and, in turn, William Butler Yeats’ poem “The Second Coming,” about the end of the world) was a breakthrough for the Roots when they needed it. The Philadelphia rap crew, led by MC Tariq “Black Thought” Trotter and drummer Ahmir “Questlove” Thompson, had critical acceptance under their belt, with their first three albums, 1993’s Organix, 1995’s Do You Want More?!!!??! and 1996’s Illadelph Halflife, but little mainstream success. But they needed a knockout punch of an album — and their platinum-certified, No. 4-charting Things Fall Apart was it.

The Roots’ Things Fall Apart is the band’s magnum opus and legitimized neo-soul and Philly bop as a force to be reckoned with in hip hop. It was considered the antidote to the grimy sounds of the day and re-popularized live instrumentation in hip hop, catapulting The Roots into stardom in the process with their first Grammy win. Regarded as their breakthrough album, Things Fall Apart, was recorded during the infamous Soulquarian recordings at Electric Lady Studios resulting in legendary collaborations from the collective. With all-star features from Erykah Badu, Common, Mos Def a.k.a. Yasiin Bey, Jay Dee, DJ Jazzy Jeff, Dice Raw, Eve, Beanie Segal, Jill Scott, Lady B, and Ursula Rucker, the album received numerous accolades and awards.

Things Fall Apart peaked at No. 4 on Billboard’s Top 200 and garnered laudatory reviews; as The A.V. Club put it, “Few hip-hop artists seem to be willing to even attempt something approaching Things Fall Apart‘s scope.” Rolling Stone called the album “top-flight” and singled out the Badu- and Eve-assisted “You Got Me” as “[perhaps] the greatest love song in hip hop history.” And Spin called it “a fearsomely intelligent yet forlorn inspiration for anyone daring to step up to a mic or a deck as rap stumbles into the future.” All this praise elevated the Roots to the next level — and in the long run, set them on course to eventually become the house band on The Tonight Show Starring Jimmy Fallon.

Now’s your chance to revisit this classic in two different editions or in a digital configuration. The standard configuration features the original album, remastered on double vinyl with a third LP of bonus tracks curated by Questlove, including a 24 page booklet featuring rare photos, retrospective essays by Black Thought and Questlove and track-by-track liner notes from Questlove. The Collector’s Edition features all of the above, but as crystal clear vinyl and a die-cut slipcase of the primary cover art plus the four original alternate covers as interchangeable lithos with foil stamp numbering plus a sixth brand new bonus cover.

E1 – Table of Contents #3 – cut from album; previously released on The Legendary EP; available for the first time digitally
E2 – What You Want – from The Roots Come Alive
E3 – Quicksand Millennium – cut from the album, released on Homegrown! Vol. 2 compilation
E4 – We Got You (Extended) – extended version of track from The Roots Come Alive
E5 – You Got Me (Drum & Bass w/ Jill Scott) – unreleased