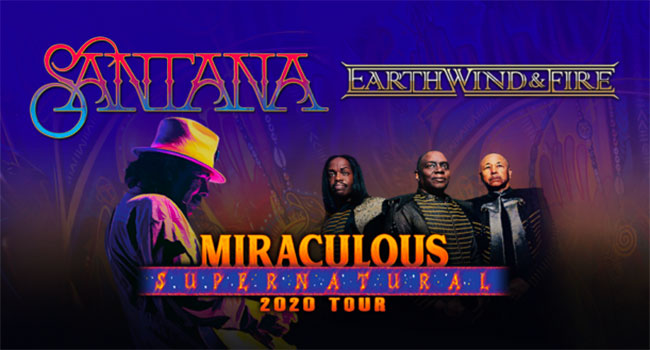 Santana is the latest artist to cancel tour dates due to the coronavirus outbreak. The Latin rock superstar has canceled the European trek of his upcoming Miraculous Supernatural 2020 World Tour due to public health concerns and European travel and performance restrictions.

“It is with great disappointment that I have to inform our fans that we are cancelling our upcoming Europe Tour,” states Michael Vrionis, President of Universal Tone Management representing Santana. “Many countries have made the decision to restrict public gatherings in excess of 1,000 people to curb the potential spread of Coronavirus (COVID-19). While we deeply regret this unfortunate circumstance, the safety of our fans is the main priority for the Santana Organization. We will keep you all informed of new performance dates as they are made, and will make every effort to return to Europe soon. Thank you all very much for your understanding.”

The trek was slated to kick off March 17th in Poland with stops in Hungary, Austria, Germany, Belgium, The UK, Ireland, Netherlands and more. Refunds are available through point of purchase.

As of this writing, the North American trek, slated to kick off June 19th in San Diego, is not being affected. Earth, Wind & Fire are on the bill as well, marking the first time these two powerhouses will share the stage in the U.S.

Pearl Jam, Slipknot, Whitesnake, Old Dominion, Sons of Apollo, Zac Brown Band and others are on the list of canceling or postponing shows due to the global pandemic. Dozens of other artists and events have canceled shows with more expected to follow. Earlier today, the City of Houston and the Houston Health Department forced the Houston Livestock Show and Rodeo to shut down 11 days early because of public health concerns.

SXSW in Austin and the Ultra Festival in Miami were also forced to cancel by local authorities. Yesterday, promoters Goldenvoice Entertainment announced that Coachella and Stagecoach have been pushed back six months to October 2020 due to the coronavirus outbreak.

The news comes as the World Health Organization (WHO) declares the coronavirus a worldwide pandemic due to concerns of it spreading rapidly.