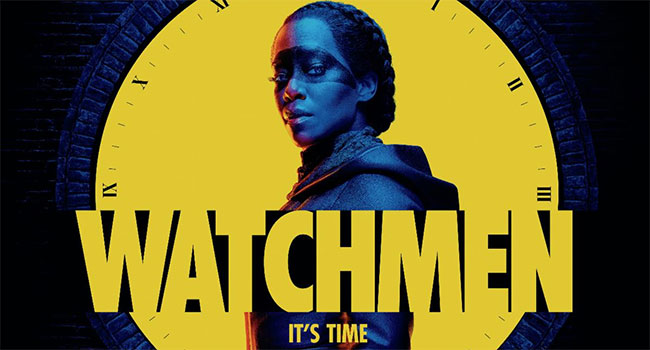 Volume 1 set for release on November on 4th

Trent Reznor and Atticus Ross have announced the release of three LPs, specifically timed to be released throughout the first season of the new HBO drama Watchmen. Created in collaboration with the show’s writers, each LP features the score from the Oscar winning composers plus artwork and packaging – exclusive to the vinyl release – that explores the culture of Watchmen America and provides revealing insights into the saga’s mythology and mysteries. Rolling Stone praised their “hypnotic” score and Entertainment Weekly hailed it as “exciting and inhuman, cosmic horror at the demon disco.”

The three LPs are now available for pre-order exclusively via Amazon in the U.S. Fans who pre-order the albums will receive Volume 1 on November 4th, Volume 2 on November 25th and Volume 3 on December 16th. Digital and in-store vinyl for each volume will be available shortly after these dates. Those residing outside the U.S. can pre-order the LPs at NIN.com.

Set in an alternate history where masked vigilantes are treated as outlaws, Watchmen, from executive producer Damon Lindelof (Emmy winner for Lost; HBO’s The Leftovers), embraces the nostalgia of the original groundbreaking graphic novel of the same name, while attempting to break new ground of its own. The series pilot – directed by Nicole Kassell from a script written by Lindelof – premiered on HBO last night. Fans can take a deep dive into the show on the newly-launched website thepeteyfiles.com.

Reznor and Ross began working together as film composers on David Fincher’s The Social Network. which earned them an Oscar and a Golden Globe. Again teaming with Fincher, Reznor and Ross wrote the original score for the American remake of The Girl with the Dragon Tattoo, which won a GRAMMY for Best Score Soundtrack for Visual Media. They also scored Fincher’s 2014 adaptation of Gillian Flynn’s novel Gone Girl.

In 2016, Reznor and Ross wrote the original score for Patriots Day, Peter Berg’s film about the Boston Marathon bombing. Acting as music supervisors for the first time, they teamed up with Gustavo Santaolalla and Mogwai to co-compose the score for Before the Flood, a feature documentary from Oscar winners Leonardo DiCaprio and Fisher Stevens. They collaborated with celebrated documentary filmmaker Ken Burns on the 18 hour 2017 docuseries, The Vietnam War. In 2018, the duo composed the original score for the Netflix film Bird Box, directed by Susanne Bier. They also contributed original music to Mid90s, a coming-of-age film that was written and directed by Jonah Hill.

In addition to Watchmen, their current slate of projects includes the forthcoming Trey Schultz-directed film, Waves, for A24. The recent announcement that Reznor and Ross will be scoring the new Pixar film, Soul, is testament to the fact that their talents are not beholden to any single genre.