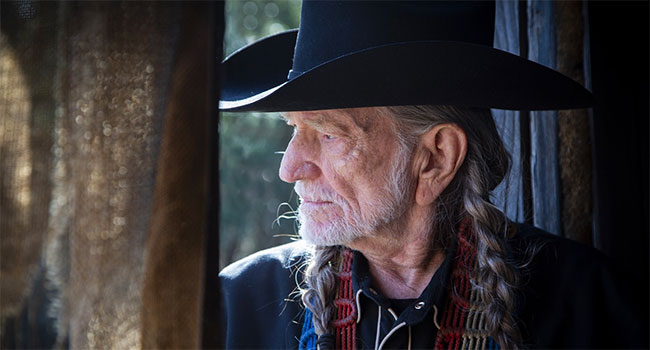 Blackbird Presents is proud to announce the worldwide video and music release of Willie Nelson American Outlaw for December 11th. The concert film and music release features an extraordinary line-up of artists that came together for a once-in-a-lifetime concert event taping at Nashville’s Bridgestone Arena to celebrate the songs of music icon Willie Nelson. Blackbird Presents/Caroline Records will release the full-length concert film in all audio and video formats including CD/DVD combo.

Performance highlights include “Willie Got Me Stoned” (Performed by Jack Johnson) and Nelson classics such as “Whiskey River (Performed by Chris Stapleton), “Me and Paul” (Performed by Eric Church), “Blue Eyes Crying In The Rain” (Performed by Vince Gill), along with duets “The Harder They Come” (with Jimmy Buffett), “Crazy” (with Dave Matthews) “You Were Always On My Mind” (with Chris Stapleton and Derek Trucks), “After The Fire Is Gone” (with Sheryl Crow), and an All-Star performance of “On The Road Again.” In addition to these star-studded performances, music history was made when Nelson and George Strait performed together for the very first time on “Sing One With Willie” and “Good Hearted Woman.”

“Willie and his songs mean everything to music artists and fans alike. Like Willie, they have inspired us to remain true to ourselves in every possible way. This incredible lineup of artists on this show is a testament to that,” says Blackbird Presents CEO Keith Wortman.

Keith Wortman and Mark Rothbaum are the creators and executive producers of the show. GRAMMY Award-winner Don Was served as music director.