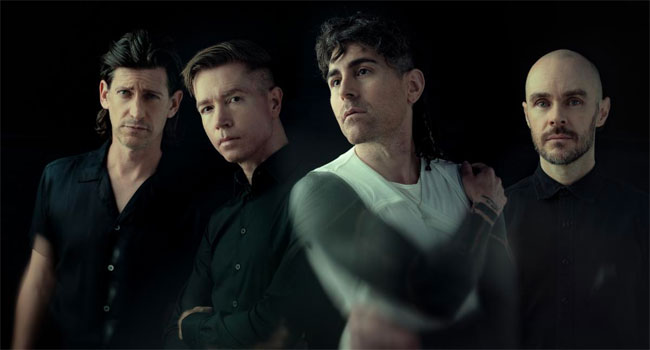 AFI has announced its eagerly-awaited new album Bodies will be released on June 11th via Rise Records. The album is heralded by two new songs — the driving “Looking Tragic” and the fast-paced, hooky “Begging For Trouble” — alongside a video for “Looking Tragic” by longtime AFI collaborator Adam Mason. Both new tracks will be included on a limited 7″ vinyl. Bodies was produced by the band’s own Jade Puget and mixed by Tony Hoffer (M83, Phoenix, Silversun Pickups).

“‘Looking Tragic’ addresses the theme of overstimulation resulting in desensitization,” says frontman Davey Havok. “Melodic and driving, the song came to life quickly and immediately stood out as a track to make bodies, if not sentiments, move.”

“After years of receiving early versions of songs from Jade and Davey, in forms that span loosely arranged chords and scratch vocal to fully realized demos, I think I have become quite adept at knowing which songs will or will not make the record,” adds drummer Adam Carson. “‘Begging For Trouble’ was green lit, at least in my mind, the moment I heard the vocals come in. To me, the track is a cornerstone of the new record.”

Bodies was mixed by Tony Hoffer (Depeche Mode, Belle & Sebastian) and mastered by Vlado Meller (Oasis, Pink Floyd). Puget produced the album and handled most of the engineering.

The album announcement follows last month’s release of “Twisted Tongues” and “Escape From Los Angeles,” which were the band’s first new music since the acclaimed The Missing Man EP in 2018. The tracks were included on a limited 7″ vinyl.

When the world last saw AFI, the multi-platinum group was packing venues behind 2017’s AFI (The Blood Album), which hit No. 1 on Billboard’s Alternative and Hard Rock Albums Charts and No. 5 on The Billboard 200. It was the band’s second consecutive Top 10 Billboard debut, following 2013’s Burials.

Following AFI (The Blood Album), the band released 2018’s The Missing Man EP. They quickly followed that release and extensive headline touring by thrilling audiences with a series of 2019 performances alongside The Smashing Pumpkins.

Like similarly artistically-minded iconic bands, AFI’s ever-evolving identity has kept their sound, themes, and overall image fresh. A place in rock n’ roll history assured by magical musical androgyny, both post-modern and timeless, AFI remains guided by the flames of authenticity and determination that defined their first ten albums and are sure to drive the next ten and beyond.