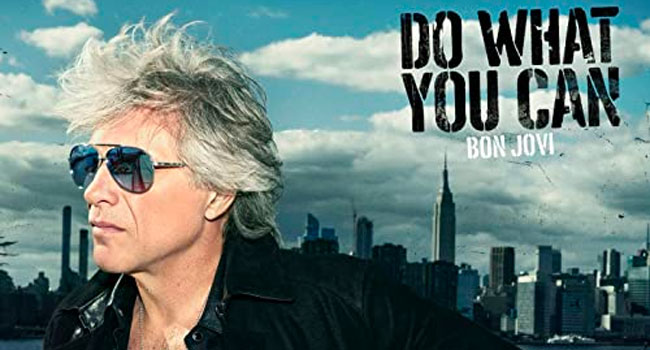 Band takes to the streets of New York amid pandemic

Well known for his extensive philanthropic work, Jon Bon Jovi spent the initial quarantine days and weeks helping feed those in need at his JBJ Soul Kitchen Community Restaurant in Red Bank, NJ. Calling himself the “hall-of-fame dishwasher” at the restaurant, Jon was captured by his wife Dorothea in a photo, which was later posted to social media with the caption “If You Can’t Do What You Do… Do What You Can.” The songwriter’s mind immediately went into action and a complete song was created the next day. The new single will be on the forthcoming album 2020, set for release October 2nd.

The lyrics to “Do What You Can” tell a poignant story and the video brings that story to life. As the pandemic shut down New York City, Jon took to the streets with mask in hand for an eyewitness account of the resilience and strength of everyday people facing a crisis the world hasn’t seen in our lifetimes.

“Shooting a video on nearly empty streets of Manhattan amid a global crisis really told the story of ‘Do What You Can’ from the place where I lived it. And I know those empty streets look similar to so many parts of America battling this pandemic. But the story of everyday heroes showing amazing courage was inspiring to see and the video, much like the song, has a great deal of hope in it too,” Bon Jovi states.

The band were in a Nashville rehearsal/video studio over the weekend where they filmed a seven song hit-filled set to air across iHeartMedia platforms soon. Guitarist Phil X also confirms the band performed the Bon Jovi 2020 album in its entirety, although didn’t reveal plans for that performance.

Earlier this year, the band were forced to cancel their world tour and delay 2020 due to the COVID-19 pandemic. Originally set for release on May 15th was a completed album with a breadth and depth of songwriting, titled for a challenging and pivotal election year. Inspired by events that transcribed throughout the first half of the year, Jon wrote two new songs in his home studio: “American Reckoning,” inspired by George Floyd’s death and the ensuing national movement for racial equality; and “Do What You Can.”