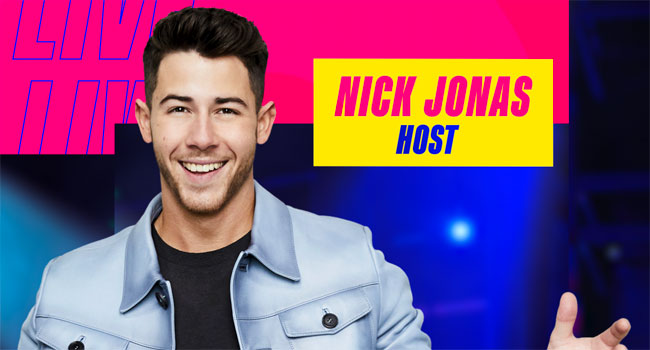 Awards set to air May 23rd on NBC from Los Angeles

Nick Jonas is set to host the 2021 Billboard Music Awards (BBMA) live from the Microsoft Theater in Los Angeles on Sunday, May 23rd at 8 pm ET/5 pm PT on NBC. The singer and actor is a member of the three-time Billboard Music Award-winning trio Jonas Brothers. The band dominated the charts in 2019 with comeback album Happiness Begins and continued to soar with their sold out Happiness Begins Tour with over 1.2 million tickets sold.

Jonas currently serves as a coach on the four-time Emmy Award-winning competition series The Voice.

Nominations for the 2021 BBMAs were released this week with The Weeknd leading the pack with 16 nods. DaBaby is the second-top finalist with 11, along with rappers Pop Smoke and Juice WRLD received multiple honors, marking the first time in a decade that two of the top ten finalists received posthumous recognition

This year’s awards are based on the chart period of March 21, 2020 through April 3, 2021. BBMA finalists and winners are based on key fan interactions with music, including album and digital song sales, streaming, radio airplay, and social engagement, tracked by Billboard and its data partners, including MRC Data. Fan-voted categories include Top Social Artist and Top Collaboration.

For more than 30 years, the BBMAs has celebrated music’s greatest achievements, honoring the hottest names in music today. Unique among music awards shows, finalists are determined by performance on the Billboard Charts. Since 1940, the Billboard Charts have been the go-to guide for ranking the popularity of artists, songs and albums, and are the ultimate measure of success in music.

The show is produced by Dick Clark Productions. Barry Adelman and Robert Deaton are executive producers.