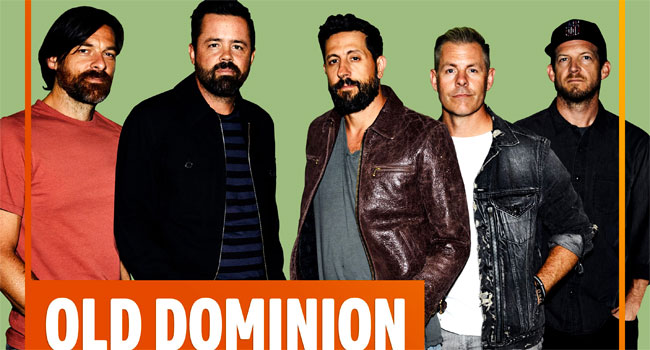 Old Dominion has released an Amazon Original cover of “Lean On Me.” Originally written and recorded by legendary singer/songwriter Bill Withers, Old Dominion’s fresh take on “Lean On Me” is now available to stream and purchase only on Amazon Music.

“We chose ‘Lean On Me’ because it’s a song that’s really timely right now,” says guitarist Brad Tursi. “Everyone’s just a little on edge and we need to lean on each other in these times. We switched it up and made the chords just a little bit more angsty and put our own spin on it so we hope you all like it.”

Old Dominion has emerged as one of the hottest breaking bands out of Nashville, fusing clever lyrics and an infectious sound. Their lyrical wit and hook heavy songwriting has certainly proved a winning method: since breaking onto the music scene in 2014, the band has notched eight No. 1 singles at country radio, surpassed one billion on-demand streams, earned several Platinum and Gold single certifications and headline arenas and amphitheaters around the globe.

Amazon Music listeners can find the track on the playlist “Fresh Country,” the best place to find the freshest tracks in country music. Customers can also simply ask, “Alexa play the Amazon Original by Old Dominion” in the Amazon app for iOS and Android and on Alexa-enabled devices. In addition to Old Dominion, Amazon Music listeners can access hundreds of Amazon Originals featuring both emerging and established artists across numerous genres, available to stream and purchase only on Amazon Music.