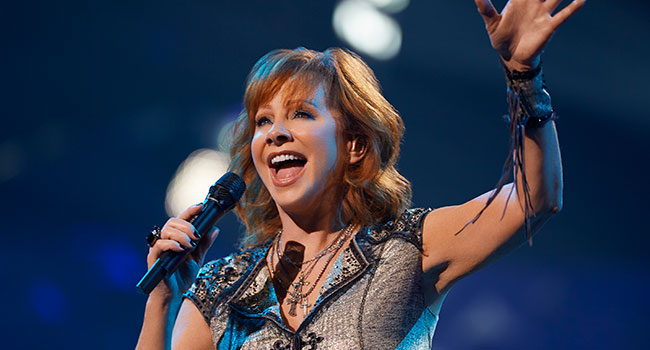 At exactly 8:01 on Friday, July 26th, the Queen of Country herself, Reba McEntire took the stage at the Grand Theater at Foxwoods Casino Resort in Mashantucket, CT. Her setlist spanned the decades, and included a few surprises.

McEntire opened with “Turn on the Radio,” her unmistakable voice cutting through the band before she reached the spotlight. Taking the stage in sequin top and brown, fringe-laden jacket, the tiny-redhead was able to project her presence to the back of the theater by glowing from top to bottom. (Literally, her boots were sequin, too!)

After “Radio,” McEntire launched into a medley of some of her earliest hits. Clips from televised performances of songs including “The Fear of Being Alone,” “Can’t Even Get the Blues,” and “Little Rock” played while Reba and her eight-piece band performed them live. The message was not subtle: Reba’s voice has not changed 1 iota in her four decade career.

Indeed, it is rare these days to find an artist whose live performance matches — and in some cases exceeds — the album recording. Reba’s voice has the impeccable ability to travel through time. There was no better example of this Friday than on “Does He Love You,” her 1993 chart-topping duet with Linda Davis.

At Foxwoods, bandmate Jennifer Wrinkle made a fine stand-in for Davis. She tried her best to use her powerful voice to compete with Reba — no doubt at the urging of McEntire — but of course, the country twang takes the prize anytime. When Reba sang the line, “Is he deceiving me/Or am I deceiving myself?” It was identical to the record. The crowd flipped. Sorry, Jen.

In fact, there were many times that night when the audience at Foxwoods went appropriately overboard. A near-acoustic rendition of “The Greatest Man I Never Knew” was prefaced with a guitar-accompanied story by Reba about her upbringing in the small town of Chockie, OK. After the song, both she and guitarist Jeff King received a standing ovation.

Those quiet moments were balanced by Reba’s ability to rock out while telling a story. She ratcheted up the sass on “The Night the Lights Went Out in Georgia.” (By the crowd reaction, you would have thought the Redhead got away with ACTUAL murder.) Reba raised her hand when asking everyone (band included) if they’d ever been broken up with, before launching into “Going Out Like That.” A video of Barbara Jean (Melissa Peterman) was played during “I’m a Survivor,” the theme to Reba’s eponymous long running (and hopefully soon-to-be-revived) sitcom.

Here, I must pause and give probably the best complaint can a reviewer give: The show should have been longer! It would be great to hear more songs from Reba at these shows. While McEntire touring is a rare gift, the concert lasted little more than an hour and ten minutes. A lot of music gets crammed in, but it feels all-too-short.

She chose the songs well for her brief performance time. Most of the 16-song setlist, with numbers including “Whoever’s in New England,” and “Is there Life Out There?,” speak to the heart of Reba’s success. Her biggest hits talk about female empowerment. Whether that’s discussing the strength it takes to choose to stay with a cheater (“Whoever’s in New England”); the regrets of settling down too early (“Is There Life Out There?”); or dusting yourself off after a hard breakup, (“Going Out Like That”).

Reba finds ways to discuss the hard things in a universal way. Empowering messages from a powerful voice, these songs have proven time and again to be relatable to men and women alike. Perhaps that is because Reba’s has a gift for choosing story songs that are never ham-fisted, and are as multifaceted as life itself. For sure, who hasn’t found out about someone committing an infidelity and wanted to take care of business?

Reba connects with songs that speak to the very core of human existence, but does so while being neither preachy nor exploitative. The authenticity shines through because of the audacity of a woman — in the 80’s and 90’s — speaking about what she really wants. Reba broke that barrier and became an icon.

The pinnacle example of this is in her set-closing signature song, “Fancy.” Written by elusive “Ode to Billy Joe” songstress Bobbie Gentry in 1970, the number tells the story of an 18-year-old girl, a red dress, and what her mother insisted Fancy had to do to escape her family’s backwoods poverty. Fancy goes from turned-out teen to successful mistress, and learns to shed the shame of a career that chose her.

The guts it took Gentry to write such a song so unapologetically about women’s sexuality, in the 1970’s, is staggering. Then Reba came along, threw in a few electric guitars, cleaned up the hook, and fiercely strutted that song to the top of the charts with an attitude only the Redheaded Queen can pull off!

To see “Fancy” performed live is alone worth the price for a Reba show. Returning for her encore in a skimpy red dress (with a split from its side clean up to her hip) she presented this song as part-theater, part-story, all country. Not only does this song demonstrate why she’s a powerful vocalist, it showcases her acting skills as well.

Commanding the stage in the red dress — also sequined, you can feel that this is the culmination of a Reba show, and really, her career: The backwoods woman from a town of 18 who started singing; now rich, powerful, and can do whatever the hell she wants, thank you very much.

Photo Credit: Justin McIntosh. TMU also suggests seeing Reba with Brooks and Dunn at their residency in Las Vegas. Their next dates are in December, and there’s no word yet on whether they’ll be back at the Colosseum in 2020.