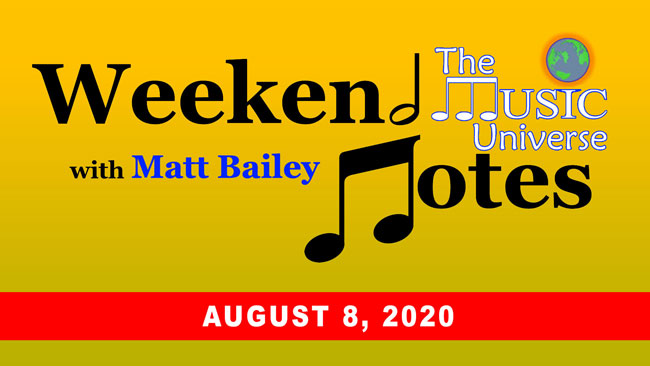 Plus, an unlikely icon goes viral

These are your Weekend Notes for August 8th, 2020.

Our top story this week, Spotify CEO Daniel Eck sparked controversy in the music industry with comments made during an interview with the online publication “Music Ally.”

In defending artists’ ability to live off of Streaming income, Eck said, “There is a narrative fallacy here, combined with the fact that, obviously, some artists that used to do well in the past may not do well in this future landscape, where you can’t record music once every three to four years and think that’s going to be enough.”

Speaking of Spotify, Award-winning duo Maddie & Tae are teaming up with viral pop trio Avenue Beat for a pair of Spotify Singles including a fresh take on the Harry Styles’ hit “Watermelon Sugar,” and Maddie & Tae’s “Everywhere I’m Goin’” off the duo’s current album The Way it Feels.

Commencing this weekend, The Who, in collaboration with YouTube will launch a six week celebration of their incredible live performances. The weekly series entitled Join Together @ Home on the band’s official YouTube channel starts tonight, Saturday, August 8th at 6 pm UK/1 pm ET. Each featurette — available digitally for the first time — will appear as a YouTube Premiere, streaming live. The broadcasts will also feature rarely seen footage, mini videos and special screen footage. The event will culminate with a stream of a previously unreleased show.

Tom Petty’s Estate has released another demo from the Wildflowers session called “There Goes Angela (Dream Away).” The demo is part of the long-anticipated release of Wildflowers – All The Rest.

Lady Gaga has launched a talk show on Apple Music. The inspiration for Gaga’s hyperactive No. 1 album Chromatica came from one magical place: the dance floor. Now, every Friday, on her brand new show Gaga Radio, she honors the larger-than-life genre of dance music by speaking with the DJs, divas, and producers who inspired her and who helped bring her dance album Chromatica to life. And each episode will include an exclusive DJ mix from one of Gaga’s guests.

Sammy Hagar is hitting the stage for the first time since the pandemic. LOPen Charity Events and the Mawaka Foundation have announced “Rockin Fore the Kids” to take place on Friday, September 18th at the Rock and Roll Hall of Fame. Hagar will headline the event with a special performance to raise funds for children and their families fighting cancer in Northeast Ohio, as well as raising funds for MusiCares and local food banks. The drive has raised over $3 million for the hospital in the past 18 years. Only a select number of tickets to be sold this year. The event will be produced outdoors and follow all COVID-19 guidelines.

And finally, a country legend is going viral on a platform for Gen Z’ers. As we told you last week, country music icon Randy Travis released “Fool’s Love Affair,” a 35 year old recording that was never heard before. The song quickly reached over one million streams on digital platforms. This week, the music legend joined the viral app TikTok and achieved four million views on his first video in less than two days.

Those are your weekend notes. This week’s episode of The Music Universe Podcast is with Lucas Hoge.

We will be taking next week off from Weekend Notes. However, you can get your fix of Matt Bailey and Buddy Iahn next week on the TMU podcast episode with 90’s country superstar Tracy Lawrence. That drops August 14th.

The YouTube show will be back August 22nd with more of music’s biggest headlines. Stay safe, have a great weekend, and see you in two weeks!