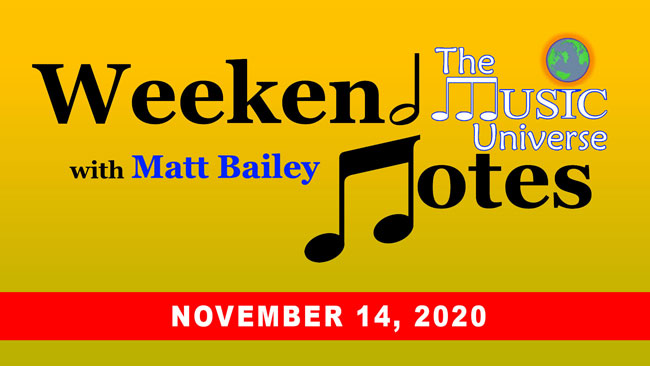 A big announcement from TMU, plus guest Carl Ray

Eric Church took home the coveted Entertainer of the Year Trophy at this year’s CMA Awards.

The Class of 2020 will join the yet-to-be named Class of 2021 to celebrate the 50th and 51st anniversaries of the event, which was postponed this year because of the ongoing health crisis. Hence they are calling next year’s gala the 50-51 edition. But that means we have all year to celebrate these great artists in 2020. In fact, you can check out our interview with inductee-elect Kent Blazy on The Music Universe Podcast.

The Music Universe has a major announcement — we are headed to Nashville next weekend! Follow us on our social media to stay up-to-date with us. The craziness starts Thursday, November 19th.

A few days after we get back from taking Music City by storm, country music legend and philanthropist Tracy Lawrence has announced the return of his wildly successful charity event with the 15th Annual Mission: Possible Turkey Fry and Benefit Concert. Since the event’s conception in 2006, it has helped to raise nearly one million dollars and prepared approximately 93,000 meals. Here’s Tracy talking about the Turkey Fry in our interview with him on The Music Universe Podcast.

This year, the two-part event will take place on November 24th in Nashville with the turkey fry kicking off the day in the parking lot of Nashville Rescue Mission. Due to current health and safety guidelines, this year’s concert portion will be a virtual livestream event from the Wildhorse Saloon in Nashville via streaming platform, Talk Shop Live.

Proceeds from Mission: Possible Turkey Fry will go to the Rescue Mission as they continue their vital work within the homeless communities of Nashville during this time of crisis for so many.

More artists are also feeling philanthropic this holiday season. Pearl Jam’s Eddie Vedder will take part in Venture Into Cures, airing November 18th at 8 pm ET. The show will feature uplifting stories about individuals and families living with a rare skin condition called Epidermolysis Bullosa and raise critical funds for research toward a cure for EB and other rare diseases. Vedder is expected to debut a new song as part of his performance.

Best-selling SoCal punk rock band The Offspring has released their first ever holiday track, “Christmas (Baby Please Come Home).” Originally released by Darlene Love, The Offsprings put their unique stamp on this holiday classic available at all digital and streaming outlets. Additionally, the “Pretty Fly for a White Guy” singers will release a limited edition, holiday red 7″ vinyl with the new song. The vinyl will feature a custom etching on the B-side of the band’s iconic logo.

Travis Tritt is set to perform the National Anthem for NASA’s SpaceX Crew-1 mission, scheduled for Today, Saturday, November 14th at exactly 7:49 pm EST. The Crew-1 mission will launch from Launch Complex 39A at NASA’s Kennedy Space Center in Florida. Pre-launch coverage, including Tritt’s performance of the Star-Spangled Banner, filmed from his home in Georgia, will air live on SpaceX’s website, NASA Television and the agency’s website.

And finally in our Setlist, legendary all-female Los Angeles rock band, The Go-Go’s; iconic lead vocalist of the Runaways, musician, actress and artist Cherie Currie; celebrated jazz and rock drummer Cindy Blackman Santana; Evanescence front woman Amy Lee; and comedian Margaret Cho, are all among this year’s diverse recipients for the 2021 She Rocks Awards. The show will be held virtually and will coincide with the virtual NAMM show. The 2021 She Rocks Awards will be hosted by Halestorm’s Lzzy Hale and take place this January. Tickets and VIP offerings are open to the public. A VIP gift box and afterparty are available for the ultimate She Rocks experience.

Also on today’s show, we speak with Carl Ray. He’s an insightful country artist who has spent his career carving out his own niche. Plus, hear his thoughts on Charley Pride’s Lifetime Achievement Award.