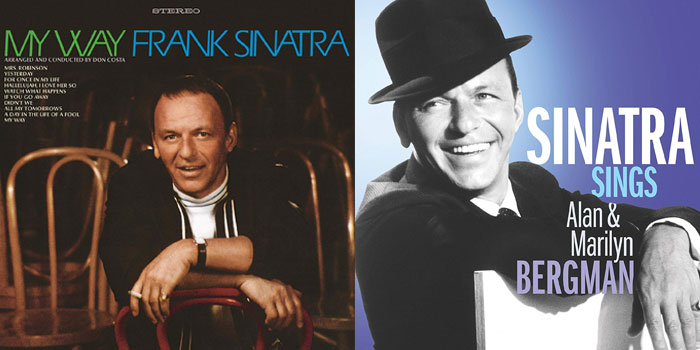 Released on Reprise in March 1969, and produced by Don Costa and Sonny Burke, My Way features a varied collection of contemporary pop songs, including Lennon and McCartney’s “Yesterday,” Simon and Garfunkel’s “Mrs. Robinson,” and the iconic title track, “My Way.” Recorded on December 30, 1968, in just one take, “My Way” charted in the U.S. and stayed on the U.K. charts for a record-breaking 75 weeks.

The My Way 50th anniversary set features four bonus tracks, including a live version recorded at The Ahmanson Theatre in 1971, which is available for streaming and for immediate download with pre-order.

Sinatra Sings Alan & Marilyn Bergman features songs by the esteemed, Academy Award winning songwriting duo, including the title track from Sinatra’s 1960 Grammy-nominated album, “Nice ‘N’ Easy.” “As lyric writers,” say Alan and Marilyn Bergman in liner notes, “to have a singer understand and be able to communicate what you wrote, whether it be about love or love lost or songs that needed a humorous approach, Frank got it… his readings were always on the money and more than what we heard in our minds.”