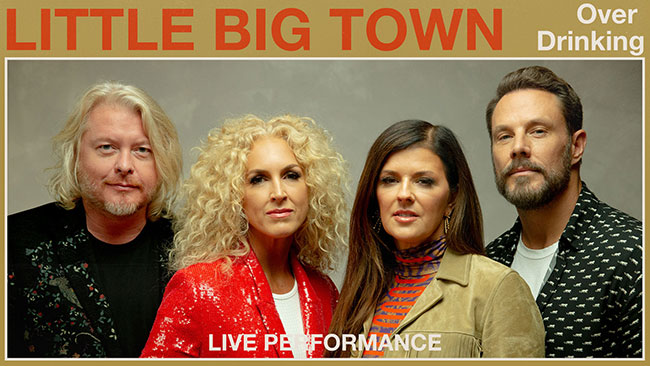 Vevo announces the release of Little Big Town’s live performance of “Over Drinking.” The video features an electrified — sans drums — performance of the lead track from their upcoming studio album, Nightfall, available on January 17th via UMG Nashville.

“A couple years ago we hit Nashville to participate in the CMA Awards, and walked away with an exclusive interview with Little Big Town as they hosted the premiere of their ‘When Someone Stops Loving You’ video,” the company shares. “Ever since we’ve been wanting the country superstar foursome to hit our NYC studio to roll through an unplugged performance. That finally happened, and ‘Over Drinking,’ the lead track from their upcoming album, is a gutsy barroom weeper with plenty of twang in its soul. Karen Fairchild and Kimberly Schlapman harmonize with grit, and we love how this one came out. Who says there aren’t any honky-tonks in Times Square?”

The video was directed by Trae Stanley, produced by Emily Louick and executive produced by Micah Bickham.

The group launches The Nightfall Tour with a trio of New York City dates on January 16th. The group will hit over 30 of the most prestigious theaters in the country, closing with two nights at Denver’s art deco gem, The Paramount. Every show excluding the two Carnegie Hall stops will feature critically acclaimed singer-songwriter Caitlyn Smith.

Little Big Town began with Kimberly Roads and Karen Fairchild, two Georgia natives who began singing together in college. Arkansas-born and Alabama-raised Jimi Westbrook, a friend of Fairchild’s husband, joined them to make a trio, and the group was completed by the addition of Arkansan Phil Sweet in 1998. From the outset, Little Big Town devoted their sound to harmony and multiple lead vocals, a combination that made the band a hard sell at first. They finally landed a deal at Mercury Records, but it fell through due to disagreements about musical direction. In the wake of the success of the Dixie Chicks, however, Little Big Town suddenly seemed a more likely commercial proposition, and they were taken up by the Dixie Chicks’ label, Monument Records, in 2000.

It’s tempting to think of Little Big Town as the contemporary country equivalent to the Mamas & the Papas, with the same trademark four-part vocal harmonies, two-male/two-female lineup, and two of the members being married to one another. The group hit the ground running with their 2002 self-titled debut album, which spawned two country hits, but it was their 2005 follow-up, The Road to Here, with its massive single, “Boondocks,” that vaulted Little Big Town to star status and platinum sales. The quartet never looked back, routinely scoring Top Ten albums on the pop charts and returning to the top of the country charts with the singles “Pontoon,” “Girl Crush,” and “Better Man.”