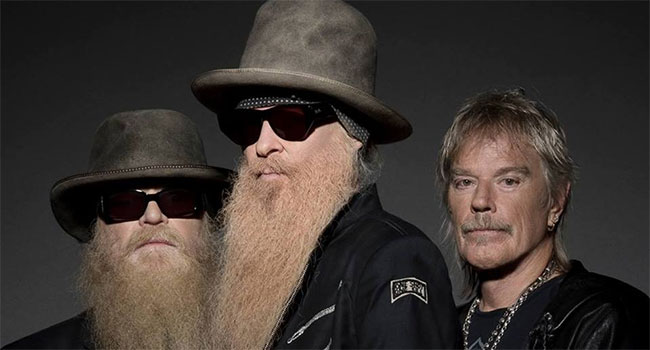 A new documentary, That Little Ol’ Band From Texas, unveils the mysteriousness behind Billy Gibbons, Dusty Hill and Frank Beard, known as ZZ Top. The Abramorama and Eagle Rock Entertainment film has been timed to coincide with the group’s 50th Anniversary Tour. Earlier this week it made its worldwide premiere at the Cinerama Dome in Hollywood, CA with Canada next week and Australia on September 1st.

The group has become one of the biggest, most beloved bands on the planet, all while maintaining a surrealist mystique that continues to intrigue fans and entice onlookers a half century after the band’s inception. Buoyed by candid band interviews, never-before-seen archive, animation, celebrity fan testimonials from Billy Bob Thornton, Queens of the Stone Age frontman Josh Homme and The Black Keys’ Dan Auerbach, and an intimate performance at the oldest dance hall in Texas, historic Gruene Hall in New Braunfels, that was shot exclusively for the film.

Since Gibbons formed the group in Houston, TX in 1969, the band has often been misunderstood. The band was inspired by the blues music and programs that aired on Mexican radio stations that could clearly be heard in the southernmost parts of the United States.

“We never said we were a blues band. We’ve never said that. We are interpreters of the blues,” Hill states.

“Even their sound had a mysterious quality to it,” Thorton shares. “I don’t think you can put your finger on what it is. It’s easy to say it’s based in the blues and all that kinda thing, but I think it’s got something else in it, but they may not even have an explanation for it.”

The documentary takes fans inside the life and career of the Tres Hombres who recorded their first album within six months of forming. The band tells how they derived their name from concert posters of ZZ Hill and BB King, how they outsmarted producer and manager Bill Ham so they could overdub in the studio, and much more.

In the film, each of the members are open about their past, most notably Beard and his extensive drug use, and the trials and tribulations it took to rise to the top. It creates a sense of transparency for a band that’s lived mysteriously out of the public eye most of its career.

It wasn’t until 1973 when the trio earned their first big record with “La Grange.” Although they were performing sold out shows throughout the country, they were still seen as outcasts in the rock world, but quickly changed that with the launch of the Worldwide Texas Tour. The band wanted to show the country — mainly New York City and Hollywood elitists — that they weren’t any less sophisticated than they were, and took the state of Texas on tour with them… Literally! The trek featured a Texas-shaped stage, four large trucks with panoramic views of the state icons, and livestock, including buzzards, rattlesnakes and a steer, that joined them on stage each night.

Following the trek, the band decided to take what started as a short hiatus but led to a two year break. During this time, Beard entered drug rehab, Hill worked at an airport briefly and Gibbons became a world traveler. Both Hill and Gibbons grew out their beards for what became their signature look, and Ham sued London Records for a greatest hits project he claimed they didn’t have authorization to release which led to the group signing with Warner Bros Records and releasing their commercially successful Eliminator album in 1983.

Thanks to MTV — which the trio thought was a series of music specials at first — the band shot to superstardom with their three minute film-like videos for “Gimme All Your Lovin'” and “Legs.” That success was no doubt assisted by the women and cars used in their videos.

As the group kicks off its 50th Anniversary Tour tomorrow night (Fri, Aug 16th) at Sunlight Supply Amphitheatre in Ridgefield, WA, I suspect they aren’t slowing down anytime soon. “We still enjoy getting to do what we get to do,” Gibbons shares. The trio will zig zag North America playing more than 30 dates with Cheap Trick as main support for the majority of the engagements.

Tickets for this must-see documentary are available via Archlight Cinemas.