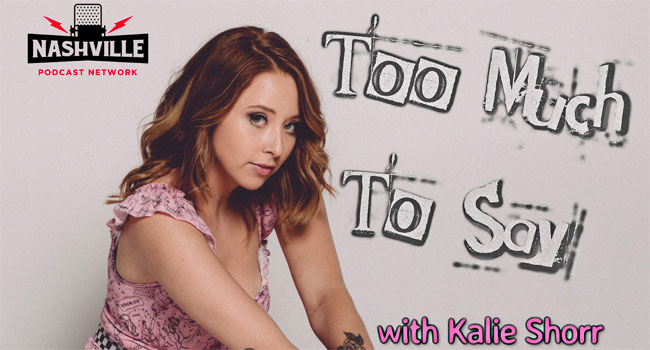 Premiere Networks and Bobby Bones, Vice President/Creative Director of iHeartCountry and host of the hit national country radio program The Bobby Bones Show, have announced the launch of a new iHeartRadio Original Podcast, Too Much To Say with Kalie Shorr, distributed by Bones’ Nashville Podcast Network. Shorr appeared on the Bobby Bones Show Thursday (Sept 17th) morning to talk about the podcast and performed “Lullaby” and “Alice in Wonderland” off her critically-acclaimed debut album Open Book.

Executive produced by Bones, Too Much To Say with Kalie Shorr features the country singer and songwriter as she shares, and mostly overshares, her thoughts on everything from music to martinis, social media to social anxiety, regrets to risky texts and much more. Shorr will also reveal diary entries and feature interviews with her crazy group of friends.

New episodes of the series will be available Wednesdays on iHeartRadio and everywhere podcasts are heard.

“When Bobby had the idea to start this podcast, I was so excited,” states Shorr. “Hosting my own show has been a goal of mine for a long time and I can’t think of a better team to be working on it with. It’s great to be given this platform and I really look forward to sharing my story candidly in a new format.”

“We made Kalie a Spotlight Artist on The Bobby Bones Show earlier this year and it was clear our audience was paying attention and believes in her,” Bones shares. “She is a force in the genre and I’m so excited to add her voice and stories to our growing network.”

According to The New York Times, Kalie Shorr’s debut album was the No. 7 Best Album of 2019 alongside Taylor Swift, Lana Del Ray and Ariana Grande. Along with a long list of other accolades, Variety called Open Book “2019’s best freshman country effort,” and Stereogum said “country music needs this kind of fire.” Shorr burst onto the Nashville music scene in 2016 with her self-penned hit “Fight Like A Girl” and shortly after, the Portland, Maine singer-songwriter became a SiriusXM “Highway Find” and was spotlighted by Apple Music, Spotify, CMT, Radio Disney Country, Pandora, Taste of Country, The Boot and Billboard magazine. She was named a “CMT Next Women of Country,” “The New Nashville” by Teen Vogue and a “Top 10 Country Artists To Watch In 2018” by the Huffington Post. She made her Grand Ole Opry debut in 2018 and has gone on to play that heralded stage 17 times so far.

Shorr has toured with Sara Evans, RaeLynn, Jimmie Allen and spent last December supporting LeAnn Rimes’ You And Me And Christmas Tour. From her work with the all-female, singer-songwriter collective Song Suffragettes, Shorr has been featured on PBS NewsHour, NPR’s Morning Edition and On Point as well as in ELLE Magazine. She rang in 2020 performing for over 200,000 people at Nashville’s largest-ever New Year’s Eve show with Keith Urban, Jason Isbell, The Struts and more. With wide praise for her current album coming from diverse outlets like NPR, Slate, People, No Depression, Rolling Stone and more, Shorr’s new year is already lighting up with The Guardian (UK) and The Tennessean calling her an artist to watch in 2020.

Bobby Bones’ Nashville Podcast Network is an eclectic collection of podcasts from a variety of Nashville-savvy hosts, giving listeners an inside look at the lifestyle and pop culture in Nashville. The network is home to Bobby Bones’ popular BobbyCast, which has more than 11 million downloads, as well as Velvet’s Edge with Kelly Henderson, Good Company with Jake Owen, Whiskey Riff Raff, Geeking Out with Kristian Bush and Sore Losers.