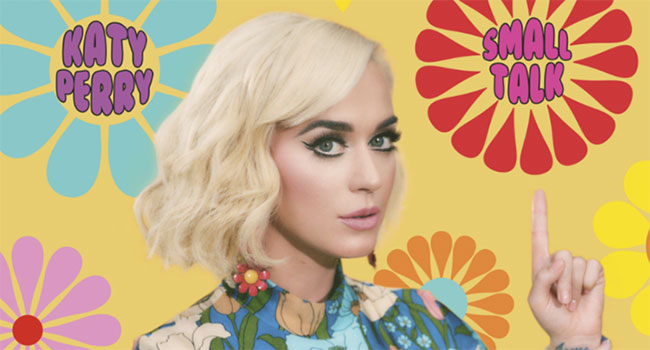 Katy Perry returns with her second single of 2019, “Small Talk.” The sparkling track is a poignant acknowledgement of the emotional distance that develops after a break-up, with Perry observing, “We had conversations about forever now it’s about the weather okay/I just can’t believe/We went from strangers to lovers to strangers in a lifetime.”

“Small Talk” follows Perry’s summer hit, “Never Really Over,” which marked her first new solo music since 2017. “Never Really Over” was the biggest streaming launch of Perry’s career and has been certified gold. Hailing it as a “euphoric breakup anthem,” Paper proclaimed, “Katy Perry Is Back and Better Than Ever.” Views of the accompanying video have surpassed 80 million.

Earlier this week, Perry was awarded a plaque commemorating 100 million RIAA song certifications. She is one of only five artists in history to have topped 100 million certified units with their digital singles – and the first-ever Capitol Records recording artist to join the elite RIAA 100 Million Certified Songs club.